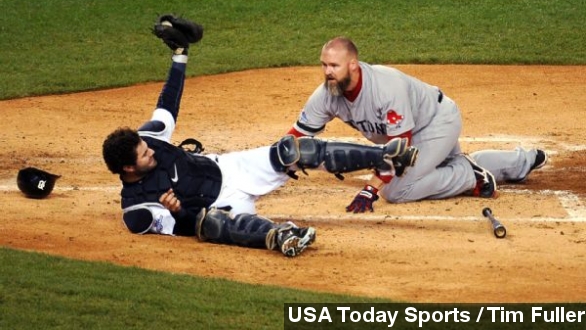 Major League Baseball has announced that it plans ban home plate collision plays as soon as next season.

Major League Baseball has announced that it plans to ban home plate collision plays as soon as next season.

The MLB executive vice president of baseball operations and Mets general manager Sandy Alderson said in a press conference Wednesday the ban is in response to the many injuries collisions like these cause — MSNBC and others say it could be tricky to get the ban in place.

The Bleacher Report points out, "These collisions were often celebrated during baseball's heyday as the national pastime. Some of the most infamous plays in MLB history—most notably Pete Rose bowling over Ray Fosse in the 1970 MLB All-Star Game—have come from hits at the dish."

But the concern is a valid one. Home plate collisions involve a baserunner barreling over the catcher to try to knock the ball loose, which can cause concussions and other serious injuries.

In fact, it was a home plate collision play that seriously injured Detroit Tigers catcher Alex Avila in last October's playoffs. (Via ESPN)

Under the new rules, catchers won't be allowed to block home plate, runners can't target the catchers, the question of whether the plate was blocked or the catcher was targeted will be reviewable and catchers or runners who violate the rules will be subject to disciplinary action. (Via The New York Times)

But Alderson says the exact language of these rules and how they'll be enforced are subject to change before the final approval.

Though WFTV notes the ban is expected to be approved and put into action for the 2014 season, it won't be official until the MLB Players Association approves it.

That approval is the final step to implementing the ban. And if the MLBPA doesn't give the okay or votes it down, the MLB can unilaterally implement the rule next year for the 2015 season.

So, as a writer for CBS Sports puts it, "Macho men, get your pitchforks. This thing is happening."

MLB officials and managers seem to be on board with the proposal, for the most part. But some players aren't too happy about it.

Oakland outfielder Josh Reddick tweeted, "No more plate collisions?! What is this? NFL quarterbacks are catchers now?" ​(Via Twitter / @joshreddick16)

And Pittsburgh rookie catcher Tony Sanchez posted, "Nothing better than getting run over and showing the umpire the ball. Please don't ban home plate collisions @MLB." (Via Twitter / @Tony26Montana)

For now, the next step for the rules committee is to write up a final draft once they determine exactly what plays will be legal and what will be illegal. Then, that final draft needs approval from the entire rules committee before its presented to the MLBPA in January.