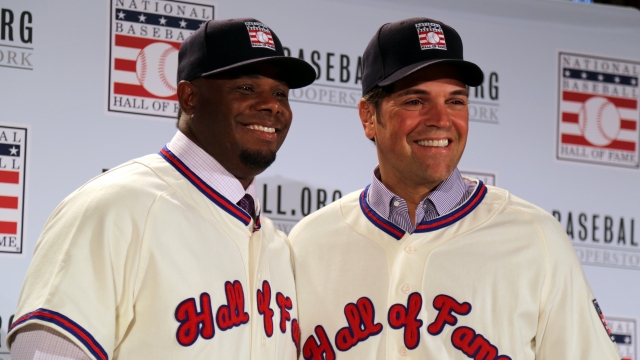 Ken Griffey Jr. was drafted No. 1. Mike Piazza was drafted with a pick so late that it doesn't exist anymore. Now, they're both Hall of Famers.

Ken Griffey Jr. and Mike Piazza are a couple of bona fide Hall of Famers, but when they were breaking into baseball, their expectations were extremely different — probably more so than any pair of Hall of Famers in history.

Griffey and Piazza are the highest and lowest drafted players, respectively, to ever make it to Cooperstown — and when we say "lowest," we mean no-one-else-is-even-close lowest.

Mike Piazza was drafted by the Dodgers in the 62nd round of the 1988 draft. If that sounds like it shouldn't be a thing, that's because it isn't — the MLB Draft stops after 40 rounds now.

"Technically I couldn't go back and be drafted again," Piazza said on Jimmy Kimmel Live.

"If this were 'Back to the Future,' you wouldn't be sitting here right now," Kimmel said.

But when Piazza was drafted, teams were allowed to pick players for as long as they wanted. So until every team passed, the draft just ... kept going.

Piazza was drafted mainly because Dodgers manager Tommy Lasorda was a family friend and told the team Piazza was worth a pick.

It's the lowest any Hall of Famer has ever gone, and it's looking like that record won't ever be broken.

This all probably sounds a little foreign to Ken Griffey Jr. He was taken No. 1 overall in 1987 and is the first top pick to ever make the Baseball Hall of Fame.

But that doesn't mean Griffey doesn't know about working through adversity. He struggled with injuries throughout his 22-year career but was still just three votes short of a unanimous selection to the Hall.

If anything, this Hall of Fame class is a testament to just how weird the MLB Draft can be, something Piazza's pointed out throughout the long career that wasn't supposed to be.

"The fact that we're completely polar opposites shows that you don't have to be a first-round overall pick to be a success in the big leagues," Piazza told SNY, "and I think that's what kind of separates us from other sports."

This video includes clips from ABC, NBC and SNY and images from Arturo Pardavila III / CC BY 2.0 and Getty Images.