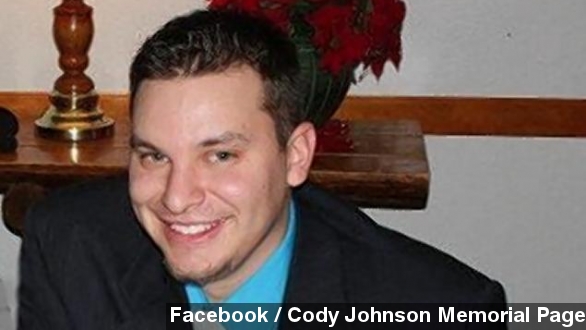 A Montana coroner says the man who was reportedly pushed off a cliff by his newlywed wife had an eight-inch forehead fracture and no wedding ring.

The coroner who performed the autopsy for the Montana man who authorities say was pushed off a cliff by his wife of barely a week testified in court Wednesday about the gruesome results.

"A coroner testified Johnson had an eight inch fracture on his forehead. He was also not wearing a wedding ring when his body was found." (Via KXXV)

The coroner also said Johnson had lacerations on his legs after his body was found at the bottom of a cliff at Glacier National Park in July. (Via CNN)

Johnson's newlywed wife, Jordan Graham, admitted to pushing him from the cliff while being interviewed by authorities just days after he went missing. (Via ABC)

NBC reports Graham is now on trial not only for Johnson's death but also for her alleged attempt to cover it up and making false statements. Prosecutors are hoping to have her found guilty of first degree murder.

But perhaps the most disturbing thing the coroner spoke about Wednesday wasn't found on Johnson's body, but nearby it.

"The coroner testified that a black cloth was found near Johnson's body. But prosecutors accuse Graham of blindfolding her husband and pushing him over." (Via WBNS)

According to New York Daily News, several witnesses said in court Johnson canceled plans he made with them on the day of his death because his wife said she had a "surprise" for him.

Graham has reportedly admitted to pushing Johnson in what she says was an argument — but she says it was out of self defense. She pleaded not guilty to first and second degree murder and to making false statements.