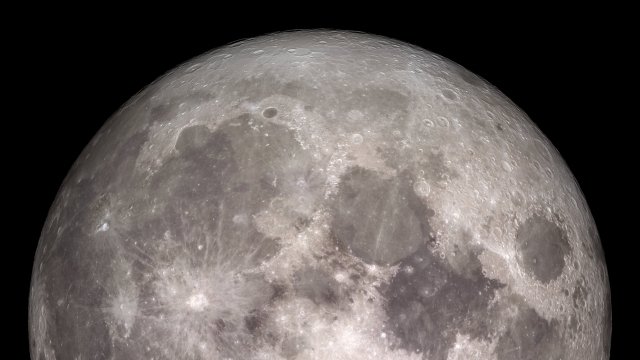 Previous estimates said the moon's magnetic field existed until about 3.56 billion years ago, but new tests suggest it survived far beyond then.

Even after dozens of missions to the moon, we're still discovering things about our nearest celestial neighbor. We knew it lost its magnetic field long ago, but astronomers just found that field lasted over 1 billion years longer than we thought.

Magnetic fields come from the rising, cooling and sinking of molten metals in the core of a planet or moon. Earth's magnetic field protects us from dangerous solar wind and cosmic radiation. Without it, life as we know it would look a lot different — or may not exist at all.

Researchers thought the moon's field was around until about 3.56 billion years ago, when its core cooled and slowed down. But new tests show it might have survived far past that point.

The Moon Is A Lot Wetter Than Scientists Originally Thought

It's hard work hauling water into space. Having water on the moon would make future space missions a lot more efficient — if we can get to that water.

The scientists heated a lunar rock sample from the Apollo missions to measure the lunar magnetic field. These rocks can act as magnetic time stamps; they show how intense a magnetic field was at a given time.

And this one suggests the moon's magnetic field existed far beyond that 3.56-billion-year point. Scientists suspect something kept the core moving. Now they want to figure out exactly when the moon's entire magnetic field disappeared and why.

In the meantime, this finding might change how we search for habitable exoplanets and their moons. Astronomers thought small planetary bodies with small cores would only generate magnetic fields for a limited time. This new discovery shows that's not always the case. It's possible that planets and moons smaller than Earth might be able to shelter life.