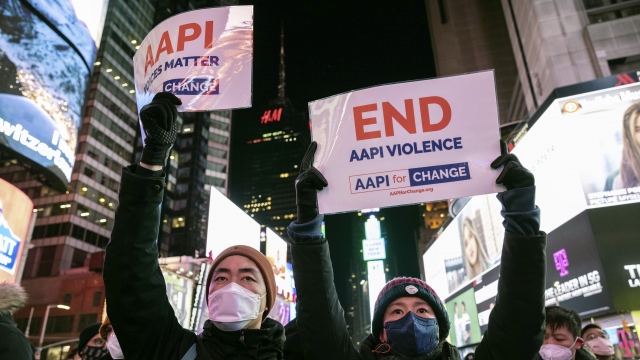 We've seen a lot of anti-Asian hate during the pandemic. The hate not only hurt and instilled fear, but also motivated more Asian Americans to buy guns for the first time.

Tsu-Yin Wu is a professor and lead researcher at Eastern Michigan University.

"When you look at racism, people feel it's abstract. But in our study, it's not. It has a significant impact," said Wu.

Professor Wu studies Asian American gun ownership. He's part of a team that surveyed around 900 Asian Americans. They found people that experienced racism were more likely to buy a weapon.

"We also have seen the stress that people experience due to  racism and discrimination actually also predicts the intention for people who still have not have the gun, but they wanted to get one," said Wu.

The Firearm Industry Trade Association estimates sales to Asian Americans increased 43% in the first half of 2020. In Wu's survey, half of Asian Americans and Pacific Islanders who purchased guns were first-time buyers — people like Baron Cabalona.

In a quiet Chicago neighborhood, Cabalona picked up his son from school after a long day of working as a nurse. He said he doesn't consider himself a gun person and didn't think he'd own a gun.

The Korean-pop music group visited the White House to speak on combatting a surge in hate crimes against Asian Americans.

But after a 60-year-old Vietnamese man was attacked and called an ethnic slur five minutes away from his workplace, he changed his mind.

"That was really sort of the tip of the iceberg. I mean, I'm going to do this and I'm going to do it the right way, which is get the FOID card in an effort to purchase a gun," said Cabalona.

In order to purchase a gun in Illinois, you need an FOID card, or Firearm Owner's Identification Card, issued by the state police.

"After I applied for it, a lot of my coworkers said, 'Oh, can you help me get one?' So I said, 'Sure.' And health care is — there's a lot of Asian people in there. So, you know, they felt like it was also the right time for them," said Cabalona.

They save people by day but when they clock out, Cabalona and his fellow health care workers worry about their lives and protecting their families. Still, Cabalona's wife Louella doesn't like guns.

"I had concerns. I asked him why he wanted to and he just said he wants it for protection, that's it," said Louella.

She didn't know until this interview that anti-Asian hate influenced her husband's decision to arm himself.

"We always feel like it's not going to happen to me. People are not going to spit on me or, you know, curse at me or slash me in the face while I'm on the train. But the reality is, like people close to me, like my husband, know and feel that it can. And that it actually moves him to act and own a weapon," she said.

A Pew study found 4 in 10 Americans live in a household with a gun, though Asian Americans compared to other ethnicities were the least likely to own a firearm.

Chris Chen is a professional marksman and adviser for the Asian Pacific American Gun Owners Association.

"And there is this pervading stereotype that guns and gun ownership — it's only a White person thing, you know, which couldn't be farther from the truth," said Cheng.

Buying a gun was a reluctant step for Cabalona but one he believes was necessary.

"You can't control the environment. And that I think preparedness is always something that we can do to help ourselves for situations," said Cabalona.