More Calls For Encryption: Are The Scales Tipping Yet? 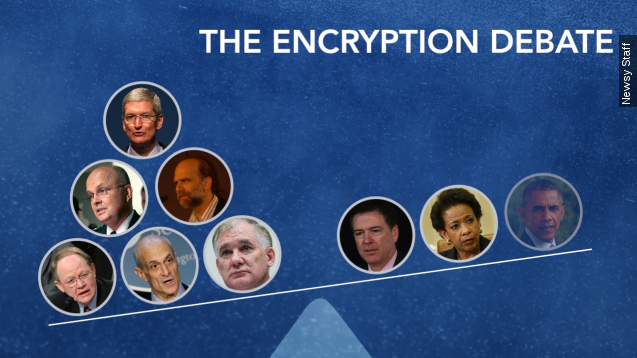 Former defense officials are the latest big names to take a side in the encryption debate.

Former U.S. defense and intelligence officials have chosen a side in the fight over strong encryption.

Mike McConnell, Michael Chertoff and William Lynn penned an op-ed in The Washington Post last week, to warn against backdoors and legislation that could undermine data security.

They say while the FBI and the Justice Department have "serious and legitimate concerns" about their access to digital data, encryption is too important to intentionally compromise.

This is the latest weigh-in in the latest version of the encryption debate, which has come to a head again after some tech companies committed to hardening their software against intrusion and monitoring late last year.

FBI director James Comey has a phrase for this alarming loss of access: "Going Dark."

"We have the legal authority to intercept and access communications and information pursuant to a court order. But we often lack the technical ability to do that," Comey said during a speech in 2014. (Video via The Brookings Institution)

The Justice Department, too, has publicly worried the laws that grant it access to digital communication aren't keeping pace with the encryption technologies securing it. (Video via The U.S. Justice Department)

And as of early this year, President Obama and his administration sided with Comey.

"If we find evidence of a terrorist plot … and despite having a phone number, despite having a social media address or email address, we can't penetrate that, that's a problem," Obama said in a January address on government surveillance. (Video via NBC)

It's anonymously backed off that position somewhat since then. According to The Wall Street Journal, officials don't want to see new laws dictating how tech companies operate.

But encryption has plenty of big names on its side, too: not just McConnell, Chertoff and Lynn, but also Michael Hayden, former national intelligence director and former head of both the NSA and CIA.

The researchers at MIT's Computer Science Lab — among them such experts as Bruce Schneier — threw in, in July. (Video via Newsy)

And, of course, we can count all of those tech companies, too. (Video via The White House)

Where much of the popular opinion lies, then, is apparent. But for all the talking and meetings and congressional hearings, the government has yet to decide on a concrete course of action.

This video includes images from Getty Images and Dan Tentler / CC BY NC 2.0 and music by trog'low / CC BY NC SA 3.0.