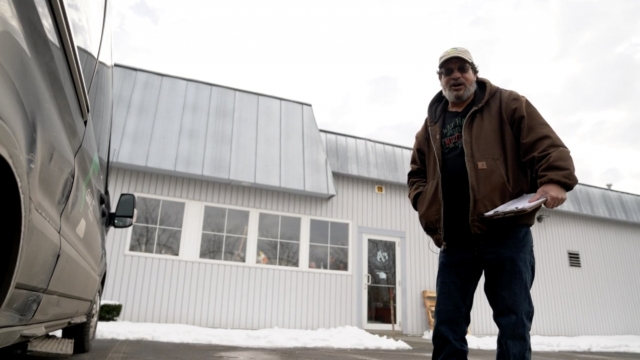 Mike Jenne takes his job as a van driver seriously; so seriously that he even lets his riders pick the music.

Every day, he drives his van more than 100 miles, helping a particular group of folks get to and from their jobs — a group that Jenne himself is a part of.

"I was having trouble finding the job because when I was younger, I did a bunch of things that I wasn't supposed to be doing, and a lot of people wouldn't accept the things that were on my record," he said.

"I've since, I fixed those problems, and now, they're not an issue, but companies don't really understand that," he said. "That sort of hurts your pride."

These numbers are significant, but so are the statistics of our current labor shortage.

The Chamber says there are more than 10 million open jobs right now, but only 5.8 million unemployed people. Thanks to a number of factors, including pandemic-spurred early retirement and parents staying home due to a lack of child care, we're short 4 million people to fill jobs.

"It's just better to meet people where they're at and feel that they don't have to compromise their personal needs for their work needs," said Daryn Forgeron, who is a staff member at Working Fields.

It's a unique staffing agency in Vermont that helps folks with criminal records, or people struggling with homelessness, addiction or mental illness, get on the right path to finding a job, with both community resources and peer support.

Some studies have shown that stable jobs are a major factor in reducing recidivism.

Historically, it's been tough work, but over the last year, they've noticed more employers asking for help.

"We've seen it kind of on the large scale in terms of just employers are more ready to partner with us. I think in the last year alone, we signed 35 new clients, which is incredible," she said. "There's more willingness to understand what we're talking about. There's a more openness of mind in terms of, 'Oh yeah, of course, there are people who are ready to work. I need them right now.'"

Tapping into a once-shunned workforce is good for business. The Center for Economic and Policy Research says that refusing to hire people with criminal records shuts the country out of up to $87 billion in annual GDP.

Eighty-five percent of HR leaders say second-chance hires perform the same or better than other employees.

Jenne not only drives people who got a job through Working Fields to their jobs, but he also got back on his feet because of them. To him, it's way more than being about a company's bottom line, having someone take a chance on you is about building back up.

"I told them my situation and where I'm coming from, and they encouraged me and actually helped me recover," he said.

Our past is a part of our story, but for the people who believe it shouldn't always dictate our future, they hope that this pattern of employers taking chances on more folks continues well past the current worker shortage.

"Don't just look at the bad things. Look at their accomplishment, you know, just look beyond the mistakes," said Jenne.