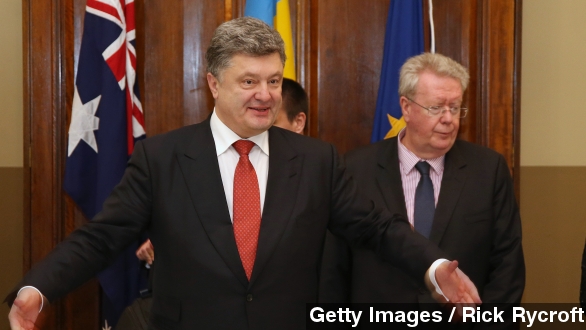 With the New Year right around the corner, Ukraine's president Petro Poroshenko is gearing up for 2015 by asking for a little extra in the way of defense spending in next year's budget.

In lieu of Santa Claus, he's asking the Ukrainian parliament to boost military spending to five percent of the country's GDP, which would total a cool $8.8 billion, up from $3.4 billion last year. (Video via Verkhovna Rada)

Asking for increased military spending isn't new —  the ongoing conflict in the country's east, currently interrupted by a cease-fire, has been raging for months now, and efforts to renew peace talks have flagged. (Video via Radio Free Europe/Radio Liberty)

But having the money is one thing: what is new is that the West, the U.S. anyway, has opened the door to sell Ukraine the weapons it wants to buy.

Last week, President Obama signed the Ukraine Freedom Support Act, which carried this line, way down on the third page: "[The bill authorizes] the President to provide Ukraine with defense articles, services, and training in order to counter offensive weapons and reestablish its sovereignty and territorial integrity"

Although Ukraine's new defense spending would be a bigger percentage of its GDP than Russia's — which sits at 4.1 percent — its neighbor to the East would still outspend it by a factor of ten.

The Stockholm International Peace Research Institute reported in 2013 Russia spent $87.8 billion on its military, and although the country's economy is currently reeling from sanctions and falling oil prices, Russian officials have said they don't plan on cutting defense spending. (Video via BBC | CNN)

But then, despite all the focus on Russia, Ukraine isn't actually fighting it — at least not directly, and Kiev has economic troubles of its own.

Earlier this month, the International Monetary Fund reported its bailout of Ukraine would fall short by $15 billion without help from western governments, and just last week Standard & Poors cut the country's credit rating to CCC-. Nine rankings below being investable. (Video via CCTV)

This weekend, Poroshenko was in Minsk, Belarus — the city that played host to the last round of peace talks — but this time around, his insistence on dropping state services in rebel-held regions of the country has stalled talks with rebels. (Video via RT)

In all, more than 4,000 people have lost their lives during the conflict and more than 800,000 more have been displaced.