More Than 30 Years After ADA, Cities Fail To Be Accessible 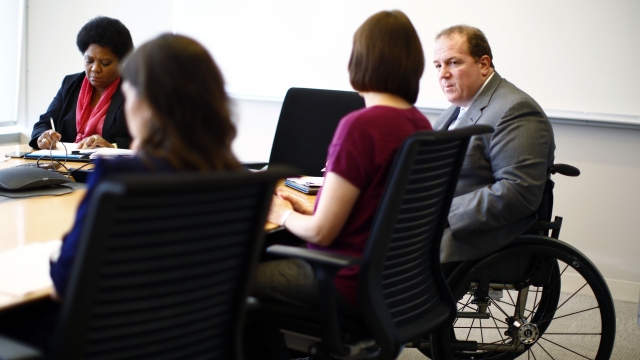 Many cities are not building with people with disabilities in mind even after the Americans with Disabilities Act.

This also comes at a time when pedestrian deaths are at an all-time high. A recent analysis from the Governors Highway Safety Administration found that in 2021, nearly 7,500 pedestrians were killed, the largest number in four decades.

A Georgetown study shows that pedestrian wheelchair users are over 30% more likely to be killed in crashes than non-wheelchair users. Nearly half of these deaths happen at intersections.

In many of those cases, drivers weren't yielding to pedestrian right-of-way, but design at intersections plays a role, too. Yochai Eisenberg and a team of researchers at the University of Illinois Chicago conducted a study that shows just how much our sidewalk and street infrastructure is failing when it comes to making cities accessible and safe for people with disabilities. Through their research they found that on average 65% of curb ramps and 48% of sidewalks across the country are not accessible.

"You'll be driving along or walking along and you'll see a very accessible curb ramp that will not be connected to any sidewalks or you'll see a nice sidewalk that ends abruptly," said Eisenberg, a disability and human development professor at the University of Illinois Chicago. "And so that lack of connectivity and lack of, you know, what I try to describe as intentional planning... like really thoughtful planning is not there."

The team at the University of Illinois Chicago discovered this gap by evaluating ADA transition plans. Under the ADA, states and local governments are required to have a transition plan in place for how they’re going to reduce physical barriers for people with disabilities, but not all of them do and no one’s really checking.

The team looked at over 400 government entities, and only 13% had ADA plans readily available; only seven of them met minimum criteria. Some of those requirements include things like getting public feedback, coming up with a plan for making things more accessible and a schedule for making it happen.

In their research, they noted that many communities don’t understand enough about these transition plans and lack data on how much of their pedestrian infrastructure is inaccessible.

"So some communities definitely did, you know, and they developed a whole plan and followed through," Eisenberg said. "But the issue is they, many of them didn't continue with it, and obviously in those 30 years, many communities have expanded, and not all of them have followed a lot of the guidelines for accessible design.... The Federal Highway Administration, the Department of Transportation at the federal level likes to talk about it as is it's a living document. It's not supposed to be something that you do once and then forget about."

Eisenberg says cities like Tempe, Arizona, are a good model to turn to. They’ve set a goal of addressing barriers to accessibility by 2030 and have created a map showing where the plan will roll out and what ramps and sidewalks will be replaced. The city has also been active in getting public participation, and that feedback has been a huge help.

One of the only ways governments are currently being held accountable for having accessible infrastructure is through lawsuits, and experts say this should not be considered the main strategy for developing accessible communities.

The Department of Justice created Project Civic Access to conduct reviews of ADA compliance. Since they started in 1999, they’ve reached over 200 settlements in all 50 states, D.C. and Puerto Rico. These reviews took place because the DOJ wanted to visit every state, and in response, the cities agreed to make improvements.

"Cities have, you know, continually worked to upgrade their infrastructure, but it kind of connects well with the way that that many cities and federal and state funding in transportation has gone to roads and highways," Eisenberg said. "That's predominantly what the budget for that infrastructure goes to and very little for sidewalks and bike lanes."

Looking at how we can do a better job going forward, disability rights advocates say that some funding from the $1.2 trillion federal infrastructure bill, which includes $11 billion for transportation safety programs, should be spent on curb ramps, sidewalks and roads designed to slow traffic to make crossing streets safer. The bill does include the first ever “Safe Streets and Roads for All” program to reduce traffic fatalities like pedestrian deaths we mentioned earlier.

When talking about these issues, it’s important to hear from someone who has experienced the difficulty of navigating inaccessible cities firsthand.

"So I am a low vision, non-driver," said Anna Zivarts.  "I have an eye condition, neurological condition called nystagmus that makes my eyes wiggle all the time, and it just means that I don't see detail, I don't see fast moving objects very well. And so I can't drive, but I do still do have a fair amount of vision sort of on the spectrum of blindness."

Zivarts works on mobility initiatives for Disability Rights Washington, a statewide advocacy group based in Seattle.

"So, we have a network of non-drivers around 200 folks from around the state that we've collected stories from that are advocates with us and trying to fight for better transit service and a big part here is just that lack of connectivity from where people live to the nearest transit stop," Zivarts said.

While these groups help bring attention to a lot of the accessibility issues cities have, part of the struggle is competing with other infrastructure projects for grants, whether that money is coming from the infrastructure bill or any other available funding.

"If you go in and say, 'We're going to put ramps in like 13 different intersections,' the way things are set up is it just isn't like it is seen as a competitive project because they're each individual projects instead of sort of one hole," Zivarts said. "One of that makes any sense, and so they're just like when competing against other infrastructure improvement needs, we see that the ADA stuff just doesn't win out."