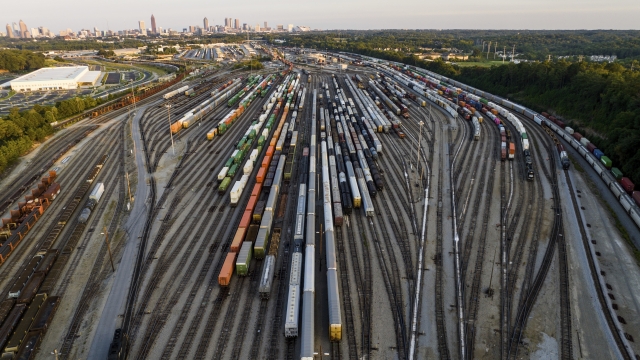 As rail companies and unions have yet to strike a deal, groups are urging leaders to act before a rail stoppage affects the supply chain.

The deadline for a nationwide rail strike is 10 days away, and several industries are on edge.

In a letter to congressional leaders, over 400 trade groups wrote: "The risks to our nation's economy and communities simply make a national rail strike unacceptable. Therefore, absent a voluntary agreement, we call on you to take immediate steps to prevent a national rail strike and the certain economic destruction that would follow."

Experts fear a rail stoppage could lead to shortages in everything from gas to food to cars. It could result in price hikes, potentially making current inflation worse. It could also cause a headache for up to 7 million commuters per day.

Ultimately, it'll all come down to whether a deal is reached between rail companies and the unions who want better working conditions.

"I got displaced for my job and had to go work about 300 miles from home, five days a week, was only home for about a day and half every week," said Cory Ludwig, a member of the Brotherhood of Maintenance of Way Employees Division.

If there's no agreement, railroads could come to a halt at midnight on Dec. 9, threatening to upend an already fragile supply chain.

This comes after a tentative deal was struck in September with an assist from the White House. It gave workers 14% raises with backpay and 24% raises over the course of five years. It also promised $1,000 cash bonuses annually.

But, it was never just about wages.

"You can work for the company for up to seven years and only have two weeks vacation, no sick days, no personal days, nothing else," said Paul Bellows, a member of the Brotherhood of Maintenance of Way Employees Division.

The Brotherhood of Maintenance of Way Employees Division is one of the four unions that rejected the deal, in part due to no sick time offered.

If an agreement isn't reached in time, the U.S. economy stands to lose up to $2 billion a day.

In the letter to Congress, trade groups warned the agriculture sector in particular is at risk if delivery of "fertilizers, chlorine, and other products essential to clean water, our food supply, and electricity generation" are interrupted.