More Than 5 Trillion Pieces Of Plastic In The World's Oceans 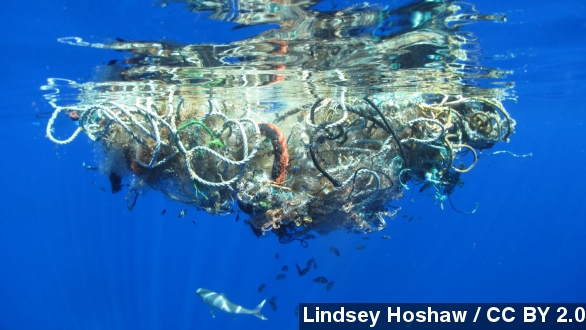 There are more than 5 trillion plastic fragments in the world's oceans, weighing more than 250,000 tons total, and we can't do anything about it.

5.25 trillion — that's a conservative estimate of just how many pieces of plastic are swirling around the world's oceans, from microscopic fragments, to giant islands of trash. And they're not going away anytime soon. (Video via National Oceanic and Atmospheric Administration)

That's 700 times the number of humans estimated to live on the planet, and there's no part of the ocean that's completely unaffected.

Want more big numbers? All that plastic trash is estimated to weigh just under 270,000 tons, about as much as either 38,000 full-grown elephants, 157,000 Volkswagen beetles or just under 7 billion coffee lids ...

Those numbers come from a paper the 5 Gyres Institute released Wednesday, after six years of surveying some 1,500 locations across all the world's oceans.

The institute gathered samples with mesh nets and conducted a visual survey, under the leadership of the institute's research director Marcus Eriksen. (Video via 5 Gyres)

Eriksen told The Washington Post, "What we are witnessing in the global ocean is a growing threat of toxin-laden microplastics cycling through the entire marine ecosystem."

Microplastics are tiny fragments of plastic less than 5 mm in length that can easily be swept along ocean currents and often carry toxins or foreign microbes and other organisms to non-native environments. (Video via Stichting De Noordzee)

Because they're so small and the plastic is so durable, microplastics present a long-term threat to ocean ecosystems across the globe.

While those microplastics can be virtually invisible in the water, the largest concentrations of trash often get swept up in the five major gyres — ocean currents that move in circular patterns in each of the world's oceans. (Video via One World One Ocean)

Those gyres can sometimes produce large islands of trash, although phenomena like the Great Pacific Garbage Patch are usually just patches of ocean with higher concentrations of debris and not physical landmasses. (Video via Grassroots News)

The study's authors say the estimates on the number and weight of plastics in the ocean are highly conservative and are actually probably the minimum.

This video includes an image from Lindsey Hoshaw / CC BY 2.0.