Vaccine Mandates Increase Across The Country 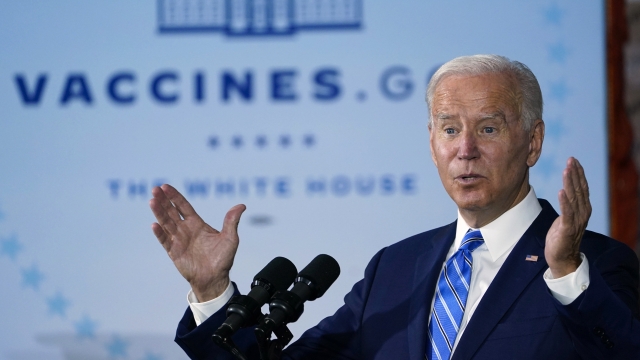 Requirements are expanding after the Biden administration announced a new rule for all employers with more than 100 workers.

For children, there's a new phase of the vaccine campaign in California and across the country.

"It didn't hurt as much, so it wasn't really as bad," one child said.

The CDC gave the green light for shots in kids ages 5 to 11. It's opening a new door for families, but fueling the debate within schools.

"It's just another layer of protection,"one father said. "And now we feel like we can fully live the lives that they want to live."

In Los Angeles, there's a vaccine requirement to get into bars and nightclubs. San Francisco plans to expand its proof of vaccination for indoor venues to kids 5 and up in the coming months.

It's the latest front in a heated debate.

The L.A. County Sheriff is seeing increased retirements with what he sees as a clear culprit.

"These are the people that are starting to walk away. That number is significant," Sheriff Alex Villanueva said. "The fact that we're seeing the uptick, we are attributing it to the vaccine mandate."

For the FAA, there are concerns that a requirement for federal workers could lead to reduced air traffic controllers. The agency's chief, Steve Dickson, said he's "not seeing any impact from that."

He also admitted he doesn't know how many of his controllers are not vaccinated, saying "the data's incomplete."

But now, requirements are expanding after the Biden administration announced a new rule for all employers with more than 100 workers. Unvaccinated employees must get the shot by Jan. 4 or be tested for COVID weekly. The Occupational Safety and Health Administration, OSHA, will be the enforcer.

In Florida, Gov. Ron DeSantis had an aggressive reaction.

"I don't think people want this decision yanked away from them," he said. "They're abusing emergency power to be able to do what they would not be able to get through the Congress. We're going to be challenging that, and I think this rule is absolutely going down.”

The requirement impacts some 84 million workers across the country.

In Congress, there are questions already where dozens of Senate Republicans are planning to try to block the new rule.

"If we do have a mandate, will it save lives?" Sen. Mitt Romney asked.

"If you take the fact that mandates work and vaccines absolutely save lives," said Dr. Anthony Fauci, director of the National Institute of Allergy and Infectious Diseases, "the answer to your question is, yes, it does save lives."

Officials in Republican-led states from coast to coast are preparing to file lawsuits as OSHA plans to fine companies $14,000 per violation if they don't comply.

"As soon as this rule is published, we'll be in court," Florida Attorney General Ashley Moody said.

All this as the decline in COVID cases plateaus and the vaccine push expands.