Town Waits For Answers In University Of Idaho Student Homicides 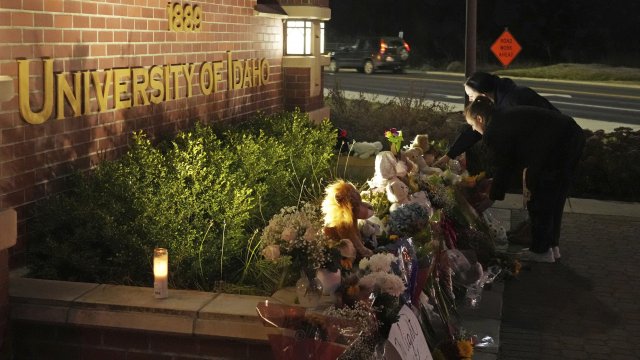 As a snowstorm settles in the town of Moscow, Idaho, the town's residents still feel unsettled after weeks without answers or arrests in a quadruple homicide investigation.

"It seems very surreal because this is the sweetest town ever and safest," said Angie Spellman, a Moscow resident. "We always get accolades for all of the good things about who we are and our community, so it doesn't seem right that this happened at all."

On the morning of Nov. 13, police discovered the bodies of four murdered University of Idaho students, stabbed to death in a house near campus where three of them called home. Two and a half weeks later, five vigils were simultaneously held Tuesday across Washington and Idaho in their honor.

The coroner says all four victims — Kaylee Goncalves, Madison Mogen, Ethan Chapin and Xana Kernodle — were likely asleep when it happened. Each were stabbed multiple times, and police say some had defensive wounds.

Coroner: Idaho Students Were Stabbed To Death In Their Beds

But, there's still no suspect and no weapon, leaving a community increasingly worried about a killer on the loose.

At the University of Idaho, a noticeably thinned out campus greeted faculty after the Thanksgiving break.

"The mood's a little uncertain for sure, and people are on edge," Daniel, a University of Idaho student, said. "A lot of the people who lived in the area where the event took place have felt unsafe lately. I know I have quite a few friends who live on that block or even in the house next door."

The school is offering remote options for students as the investigation continues.

Just nine miles away at Washington State University in Pullman, there's no remote option, but security patrols have increased.

In town, residents still feel disbelief that this happened here.

"People are on edge maybe a little bit, but I don't not feel safe in this town," said Mike Spellman, a Moscow resident.

"I think ... we will recover from this, but right now, it's very different," Angie Spellman said.

The public has closely analyzed much of the investigation, which has become evident in countless social media posts from people trying to piece things together themselves. It's led to a spread of misinformation about the case, prompting the local police department to make a specific web page where people can find responses to many of the theories that have come up.