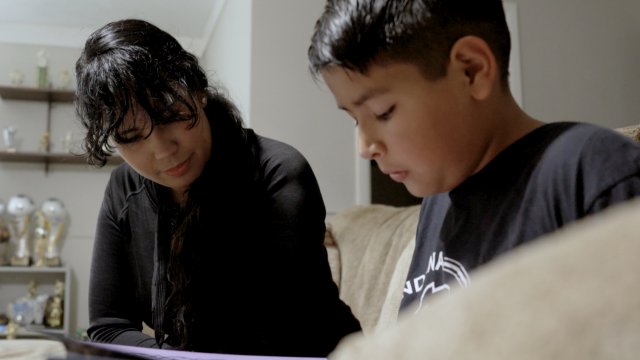 DACA could soon die in court after a federal judge ruled in favor of Republican-led states who say the program is illegal.

When single mom, Marlen Ortiz, is not working her two jobs, she gives her 11-year-old son her undivided attention.

The former F.C. Indiana soccer player will do anything to make sure her son achieves his dreams, but they could soon be forced to live in different countries.

Ortiz’s son was born in Indiana and is an American citizen, but she isn’t.

"My mom is the best mother I know," her son, Nilson Garcia, said. "She is the most beautiful mom I ever met. She's the loveliest mom, and I love her. I love her so much."

When Ortiz was only 13, she traveled from Mexico to the U.S. alone to flee poverty and gang violence — and to reunite with her step-siblings in Indiana. Smugglers helped her cross the border illegally.

"We walked the desert for a lot of days," Ortiz said. "I think it was probably one week or two."

Now at age 29, she's been shielded from deportation and allowed to work in the U.S. for nearly 10 years as a recipient of the Deferred Action Childhood Arrivals Program, or DACA. But the Obama-era policy could soon die in court after a federal judge ruled in favor of nine Republican-led states who said the program was illegal.

NEWSY'S BEN SCHAMISSO: "What would happen to you and your son if you got deported?"

MARLEN ORTIZ: "I will sacrifice seeing him growing up for his security, for his well being. I will never take him back with me. That's a no."

SCHAMISSO: "How much do you understand about what is DACA?”

GARCIA: "It's a paper that saves my mom. I’m going to be sad if they take her away.”

Ortiz has been living in this neighborhood in and around South Bend, Indiana for more than 15 years. She calls the life she's built for herself there the "American Dream," not just for her, but also for her American child.

Now their future hangs in the balance as Congress struggles to pass immigration reform.

Democrats want to pass the bill with a simple majority in the Senate through a process known as budget reconciliation, but rules limit what can be added.

Two attempts to include protections for millions of undocumented immigrants have already been rejected by the Senate's rules referee, and now Democrats are pushing for a third proposal.

Republicans argue it will encourage more people to immigrate illegally, but Ortiz says she's seen this movie before.

"In 2010 when I was delivering my son in the hospital, the entire House of Representatives and the entire Senate, including the president, were from the Democrat party," Ortiz said. "They did not pass the Dream Act at that time."

Ortiz says it's not only the fate of DACA recipients that's at stake. Over 250,000 U.S. citizen children have a DACA parent, according to the Center for American Progress.

After all these years in limbo, Ortiz says she has learned to live with the uncertainty. She tries not to obsess over her temporary status, calling it "just a piece of paper" that has kept her for nearly a decade, but perhaps for not much longer.