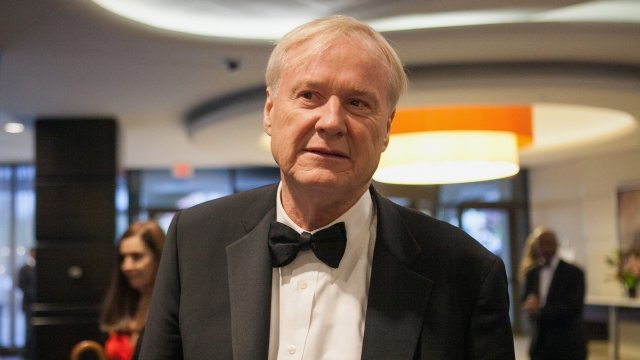 The comment was caught on camera before an interview with the then-presidential candidate.

Before interviewing the candidate, Matthews made a comment about giving her a "Bill Cosby pill." That statement, caught by a hot mic, likely referred to the many allegations that Cosby drugged and sexually assaulted women.

The Cut obtained and published the video on Friday. Matthews told the outlet: "This was a terrible comment I made in poor taste during the height of the Bill Cosby headlines. I realize that's no excuse. I deeply regret it and I'm sorry."

Matthews is already notorious for making sexist and misogynist comments toward women. A writer with Media Matters for America compiled and tweeted nearly 40 other incidents.

Other incidents include Matthews ogling Melania Trump, saying Sarah Palin "could not be hotter as a candidate," and asking former Sen. Chris Dodd if he found it difficult to debate women.

As of early Friday evening, neither NBC nor MSNBC commented on the recently published comment — though television host Joy Reid said she was filling in for Matthews on "Hardball." Both networks have been taking harder stances on harassment. In 2017, the networks cut ties with Matt Lauer and Mark Halperin following accusations of "inappropriate sexual behavior" and misconduct.