Mueller Investigation: One Year Later, What Do We Know? 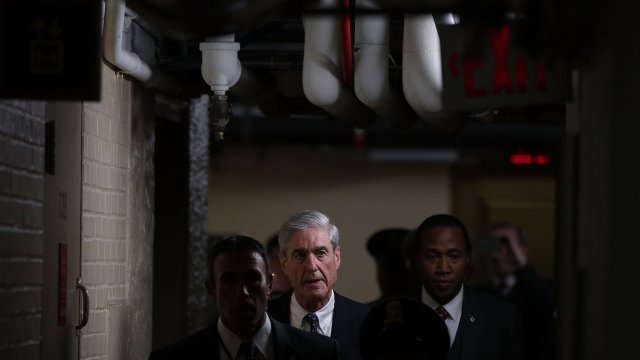 It's been one year since Robert Mueller took over as special counsel to investigate alleged Russian interference in the 2016 election.

It's officially been one year since special counsel Robert Mueller began the investigation into Russian meddling in the 2016 U.S. presidential election.

In his time leading it, he's brought charges against 19 people, including former Trump campaign chairman Paul Manafort, former national security adviser Mike Flynn and former Trump campaign adviser George Papadopoulos. Mueller has secured plea agreements from several of them, but we still don't know the full extent of his investigation.

We don't know what he's found — or hasn't found — about the hacking of the Democratic National Committee or Hillary Clinton's campaign emails. It's also unclear if he'll follow through on his reported threat to subpoena President Trump to sit down for an interview.

Much of this uncertainty is due to the fact that Mueller hasn't made any public remarks since he was appointed. He hasn't done any interviews or held any press conferences. There's a precedent for his silence, though.

Though Libby was convicted, his sentence was commuted by President Bush. In April 2018, Libby was pardoned by President Trump, which many speculated was the president's way of sending a message to Mueller about the investigation.

On several occasions, Trump has called for an end to the Russia probe, which he's referred to as a "witch hunt."