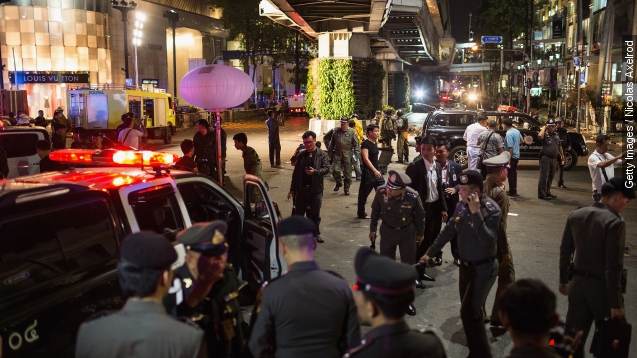 The explosion hit near the Erawan Shrine in the Ratchaprasong Intersection. Local police report it may have been caused by a motorcycle bomb.

An explosion near a shrine in Bangkok has killed at least 27 people and injured as many as 80.

"Here are scenes of the most appalling carnage here, right at the center of Bangkok's most popular shopping district," a BBC reporter said.

"Local hospitals have been appealing both for blood, but also for translators to help with the international casualties," a reporter told CCTV.

The explosion hit what is known as the Holy Intersection of Bangkok, near the Erawan Shrine.  The shrine is reportedly a popular site for Hindu and Buddhist worshipers.  (Video Thai PBS)

The source of the explosion is unknown, but the BBC reports local police believe it may have been caused by a motorcycle bomb. Two other bombs have been found and police plan to detonate them safely.

The intersection where the explosion occurred has been the site of both political protests and bombings in the past. It is in the city's main commercial district with several large shopping centers nearby.