Country Musicians In Nashville Use Technology To Survive The Pandemic 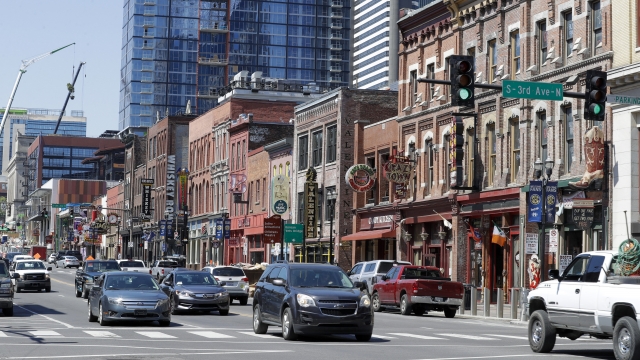 The Associated Press reported 50,000 unemployed musicians in Nashville in May.

The crowds have picked up since the beginning of the pandemic, but there are still thousands of musicians out of work in the capital of country music.If country music was a person, Nashville would be its heart. Thousands of would-be musicians migrate to the city to get discovered every year. Tess Johnson is one of them. She moved from Iowa to Nashville in 2014."I moved here for music," she said. "I got scholarships to go to a school here, and so it all kind of worked out. The stars aligned for me to be here."But two years ago, a dark cloud moved over those stars."The pandemic hit," Johnson said. "And then opportunities are less and venues are closing, tours are canceled. All of sudden, full-time musicians are getting part-time jobs, and ... You almost kind of have to be crazy to like, keep going at it."Johnson wasn't the only one who felt knocked off track. A whole city filled with musicians, restaurant workers and bar owners was forced to shut down, sit and wait.Newsy has spoken to musicians throughout the pandemic about the things they've had to do to cope with this new reality. Some of the things they've endured include canceled concerts, mask mandates and smaller crowds.Anne Buckle is another musician in Nashville."As a musician, you were forced to pivot," she said. "For some people that looked like leaving Nashville and getting a job as a nanny or in construction. For me, luckily, I pivoted and got a lot of online work. So I started doing Airbnb, online experiences, songwriting with people from all over the world."Touring musician Nickolas Widener says he also works at a retail eyeglass business to keep the lights on and didn't expect the pandemic to last this long."I mean, this is going to be taught in history books, you know? I don't know how I'm going to explain it to my kids. It's wild," Widener said.Nashville Music Association president Dave Pomeroy says COVID turned the industry on its head. "Suddenly this came along out of the blue and it really has changed the lives of countless people in the music business," he said. The Associated Press reported 50,000 unemployed musicians in Nashville in May. "At local 257 here in Nashville, we typically pay out about $10 to $12 million a year in wages in what we would call a normal year," Pomeroy said. "2020 was down about 25%, which could have been a lot worse."There has been some relief, though. Big county music stars like Blake Shelton have stepped in to help raise money for these future stars. But as the world enters a third year of this pandemic and Omicron is marching its way through the United States, many have a heartbreaking reality to face — leaving the business they love.The news isn't all gloom and doom. Some musicians savvy enough to get into streaming have found a whole new audience and a new avenue to make money. Just this past April, streaming services like Spotify, Apple Music and Amazon saw a spike in country music streams, contributing to the historic 1.2 billion record as people sought a way to cast their way through the pandemic."Nashville is very unique in that we have a very high level of union recording with independent artists, as well as the big-name, touring acts and the big stars. And so, we've already developed ways for musicians to record separately at home and pass the files around over the internet."Johnson agrees, adding she's seen social media play a huge role too."As times change, I think things like TikTok and YouTube and even Spotify — getting on playlists, things like that are becoming more important than ever, and it can really be someone's shot."A trend that many in the country music industry say they hope is here to stay.