Myanmar Commission Finds No Evidence Of Genocide Against Rohingya 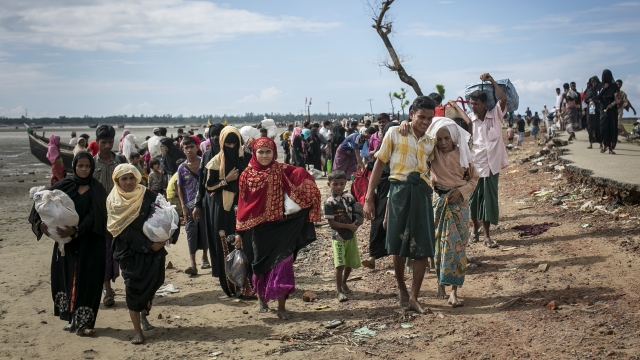 An independent committee said there's no evidence that genocide took place during the 2017 military crackdown, but did acknowledge other violations.

A committee appointed by Myanmar's government to look into alleged abuses in Rakhine state in 2017 said it didn't find evidence of genocide against Rohingya Muslims.

The Independent Commission of Enquiry said in a Facebook post Monday it had submitted the findings of its investigation to Myanmar's president.

The panel did acknowledge that war crimes, serious human rights violations and violations of domestic law took place during the 2017 military crackdown in Rakhine state.

But it said the crimes committed didn't constitute genocide. And critics say the report is just another attempt to whitewash the situation the Rohingya are facing.

Since 2017, thousands of Rohingya Muslims have died and more than 700,000 have fled to neighboring Bangladesh amid persecution and alleged ethnic cleansing. Myanmar says it was fighting extremism.

The commission's findings were released just days before the United Nations' top court is expected to issue a decision on a request for emergency measures in a genocide case against Myanmar. The suit, which was filed by the African nation of Gambia, accuses the country of committing "genocidal acts" against the Rohingya in violation of the 1948 Genocide Convention.