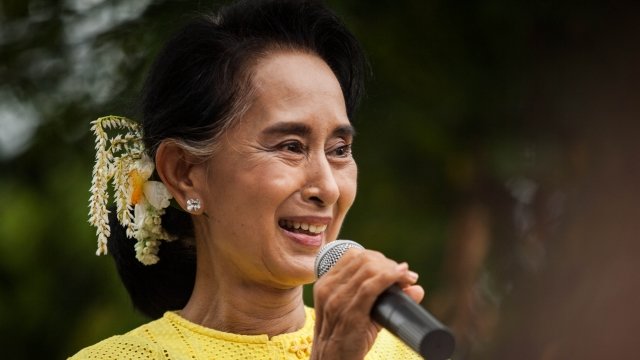 Aung San Suu Kyi, leader of Myanmar, will skip the U.N. General Assembly. The U.N. says the violence toward the Rohingya is "ethnic cleansing."

Suu Kyi isn't technically the president. Myanmar's Parliament elected her to the role of state counselor because she is barred from holding the presidency. But the position effectively makes her Myanmar's de facto leader. One of her close political allies, Htin Kyaw, was elected president in 2016.

The Rohingya people are a minority ethnic group in Myanmar, largely shunned by much of the country's mostly Buddhist population. They're not officially considered citizens of any country, which makes it tough for them to get work.

Clashes between the Rohingya and Myanmar's military go back decades, and many Rohingya have been forced to live in camps. Recently, a Rohingya militant group coordinated a series of attacks on police and military in Myanmar. Refugees say Myanmar's army retaliated, killing hundreds of Rohingya civilians and driving them out of their homes.

The U.N. criticized Myanmar's government after more than 300,000 Rohingya were forced to flee to escape the violence.

An increase in violence against Myanmar's Rohingya Muslim population has forced the World Food Program to halt aid over safety concerns.

The U.N. General Assembly presents an opportunity to work on humanitarian problems, but it could be more difficult without Suu Kyi's attendance or input. Still, the U.N. will hold a meeting to discuss how to address the violence.

Suu Kyi, who won a Nobel Peace Prize for her pro-democracy activism, denied the military is targeting Rohingya people. She instead blamed terrorists for the attacks on Rohingya communitites.

However, Suu Kyi did pledge to address the situation in a speech Sept. 19.

Correction: The updated version of this story clarifies that Myanmar's Rohingya people are stateless and that this recent development is the latest in a decadeslong conflict.