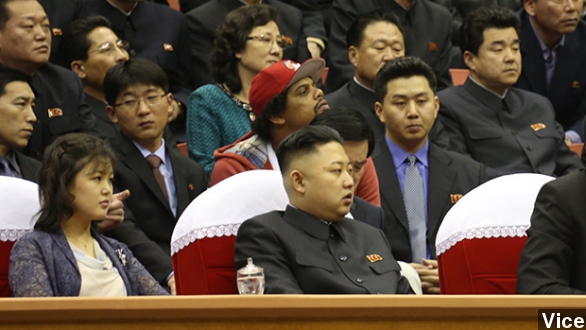 ​North Korea's Kim Jong-un might have fired his uncle, and by some reports, his aunt could be next.

​North Korea's Kim Jong-un might have fired his uncle, and by some reports, his aunt could be next.

Observers say it's all part of the young leader's move to consolidate power two years after he took the country's helm following the death of his father. (Via ABC)

As former U.S. Secretary of State Madeleine Albright told Businessweek, "He is clearly trying to prove that he is in charge."

Jang Song-thaek, Kim Jong-un's uncle by marriage, had been installed in North Korea's government to keep an eye on the young leader after he took over from his father. (Via BBC)

But that didn't last long. According to South Korea's spy agency, his nephew reportedly sacked him from his post and had Jang's aides executed on corruption charges in November. He's now said to be seeking asylum in South Korea. (Via The Wall Street Journal)

And according to The Telegraph, Kim may be getting ready to kick his aunt out of the regime and replace her with his sister. A Tokyo-based professor told the paper: "He is trying to bring in a younger generation of decision-makers and has kicked out the older ones, which is causing a lot of problems in the elite in Pyongyang."

A North Korea expert in Seoul puts it this way, telling the Los Angeles Times: "The young forces are rising and pushing out the old.  Kim Jong Un can't run the country when he has subordinates who are twice his age."

By many accounts, the Kim regime is more eager than ever to suppress dissent.

In what one South Korean intelligence official called a "reign of terror,"  the North's government has reportedly ramped up its use of public executions. (Via The Asahi Shimbum)