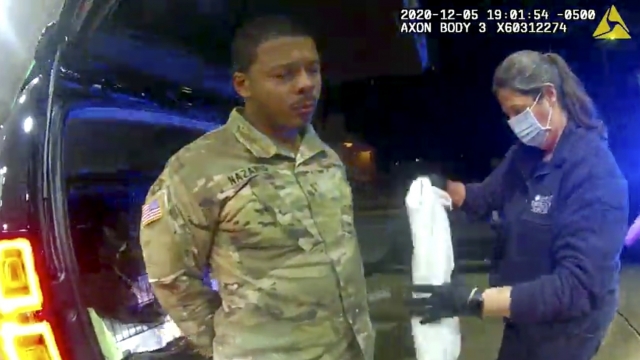 2nd Lieutenant Caron Nazario was pepper sprayed by Windsor, Virginia police during what many are saying should have been a "routine" traffic stop.

Lieutenant Caron Nazario said, "I'm honestly afraid to get out."

Officer Joe Gutierrez responded, "Yeah, you should be."

Reaction is swarming in from local activists to the Virginia capitol to Congress after video shows Windsor, Virginia, police aggressively stopping and hitting a U.S. army officer.

“I’m actively serving this country and this is how you're going to treat me? What’s going on?”

Second Lieutenant Caron Nazario was pepper sprayed and threatened last December in what should have been a "routine" traffic stop.

Police say Nazario was eluding police but Nazario says after seeing flashing lights he drove about a mile to a gas station so he could be in a well-lit area.

As Nazario stuck his hands outside the window and pleaded for calm, officers Joe Gutierrez and Daniel Crocker pulled their guns. The Army veteran was sprayed and knocked to the ground.

In a statement, the local NAACP said, "We are done dying. We will not stand silently while another African American's civil rights are violated."

Virgina Attorney General Mark Herring called the incident "unacceptable" and the Legislative Black Caucus said, "Not even a military uniform and brave service to this country can shield Black and Brown Virginians from racist police harassment and brutality."

Nazario asked officers, "Can you please talk to me about what's going on?"

Officer Gutierrez then ordered Nazario to "Get on the ground."

Congressman Bobby Scott of Virginia said he was "horrified" watching the footage and is calling for Congress to pass the George Floyd Justice In Policing Act to prevent incidents like Nazario's.

The lieutenant was not arrested or charged but is now suing the two officers for $1 million.