Supreme Court To Decide On Legality Of Alabama Congressional Maps 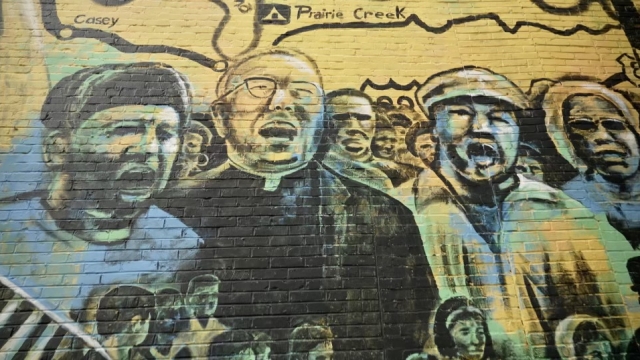 The Supreme Court is set to decide if Alabama violated the Voting Rights Act when it redrew Congressional maps.

The mural painted on the side of a Montgomery, Alabama, building represents more than brush strokes. It depicts a time in history when poll taxes and literacy tests kept Black people from voting. Fifty-seven years later, there's a new tug of war around voting rights bringing Alabama to the center stage once more.

It started after the new GOP map was drawn up.

"I feel like there are elements in the Democratic party that want to redefine the Republican party and want to turn us into this entity that is not for fighting for Civil Rights," Alabama GOP Chairman John Wahl said.

The NAACP lawsuit claims Republicans didn't account for the surge in Black voters. They challenged it and a lower court sided with the NAACP.

"We're still feeling good that once they hear our arguments that they will agree with the lower courts," NAACP Alabama State Conference President Benard Simelton said.

Then, the Supreme Court stepped in, allowing the new map to be used until they sort things out this fall.

"I'm confident because I think if you look at the lines and look at the basis from the past, the historical data with these lines, you can see this is not something that was pulled out of order or something new," Wahl said. "These are based on historical presence and keeping these communities together."

Sitting at the center of this, in a historic downtown neighborhood where Martin Luther King Jr. once lived and the Alabama bus boycotts kicked off, business owner Valerie Smedley runs an unofficial mini museum dedicated to teaching people about civil rights.

"So, a lot happened out here regarding the bus boycott. This is the nucleus of where things happened," she said.

Smedley understands the importance of having more Black representation.

"I love this T-shirt because it tells you it's OK for us to join, you know, the things that Blacks want to do and things that we've heard about where we need to stay woke, the redistricting, the things of that nature," she said. "We need to watch what is happening around us and not take it for granted."

Some say it's a numbers game.

"The reason we believe that is because Blacks alone make up over 27% of the population in the state of Alabama," Simelton said.

What does that mean and why does this matter?

The simple explanation comes from the Brennan Center for Justice.

They say these lines, or districts, can influence who wins an election.

"The numbers are speaking for themselves," Smedley said. "We are starting to grow. We're owning more. We're in charge of more. We have more businesses. So, if we continue on that path, even as slow as it may be, at some point, we're going to be more in charge."

Residents and business owners like Smedley say much like the fights during civil rights, they're just looking for a fair shake and don't want to be brushed off or written off.