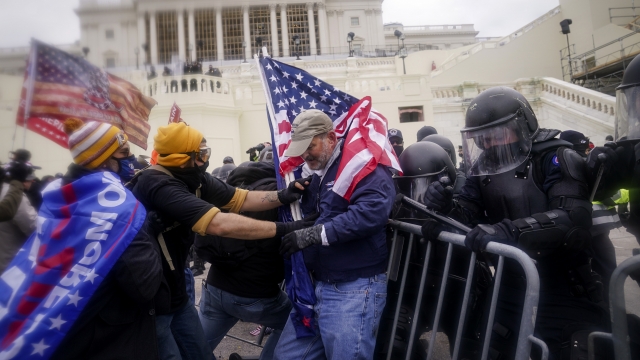 Speaker Pelosi has said the panel has as much time as it needs to complete its investigation and submit a report on the causes of the attack.

The latest investigation into the January 6 riot begins.

House Speaker Nancy Pelosi named her eight appointees to the panel less than 24 hours after the House voted to create the select committee.

She has tapped Homeland Security Committee Chairman Bennie Thompson to lead the panel.

Two other committee chairs, Adam Schiff of House Intelligence and Zoe Lofgren of House Administration are joining the panel.

"We are committed to doing something that honors the vision of our founders. It's going to be high level and it's going to justify the support of the American people. It's not political," said Speaker Pelosi.

We don't know whether Minority Leader Kevin McCarthy will appoint five members to the panel.

McCarthy has criticized the panel as being unnecessary and political.

Yesterday, the Republican leader denied multiple reports that he threatened to strip freshman Republicans of their committee assignments if they agreed to serve on the panel.

But here's what he said about Congresswoman Cheney's acceptance of the position from Speaker Pelosi.

"I was shocked she would accept something from Speaker Pelosi. It seems to me since I didn't hear from her maybe she's closer to her than with us. I don't know," said Leader McCarthy.

Congresswoman Cheney says she is "honored" to serve on the committee. She said in a statement: "What happened on January 6 can never happen again. Those who are responsible for the attack need to be held accountable and this select committee will fulfill that responsibility in a professional expeditious and non-partisan manner."

Speaker Pelosi has said the panel has as much time as it needs to complete its investigation and submit a report on the causes of the attack and recommendations to prevent another one.