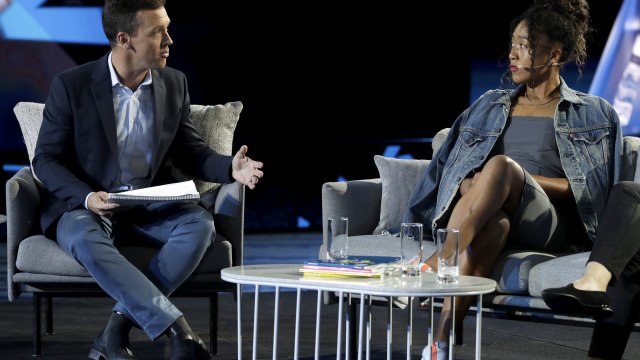 Tennis won't have its brightest young star on the big stage. Naomi Osaka withdrew from the French Open to focus on her mental health, with news conferences – in part  – triggering her anxiety.

"If you grow up watching people like Venus and Serena Williams getting asked all kinds of questions in post match press conferences being women, being black women, you would be a little bit wary, I think, of the media as well," Davidson said. "So I do think that we have to reckon with where some of that hesitancy and apprehension comes from."

Osaka;'s decision to skip news conferences at the French Open looks at the larger question: Do athletes need reporters like they did decades ago?

"Maybe she really doesn't need to deal with the press," said New York Times columnist Kurt Streeter.  "So you could easily make a case that she, as an individual does not. But her tour does."

Streeter says a sport like tennis, as a whole, still benefits from having traditional news coverage, which generate buzz on storylines from professional journalists...who can, for instance, write an in-depth piece.

"The difference between somebody seeing from the outside and then telling the story is just completely different than somebody telling their own story that, you know, in a way when they work, they can, I think, work together to get to a larger truth, to get to to a greater truth."

A lot has been made of the value of sports news conferences. Jane McManus, from Marist College, believes organizers can make accommodations for athletes with Osaka's concerns. But reducing this type of media availability may not be the answer.

"Part of the reason is you get an authentic reaction from people, right? It's right after something has happened." she said. "They're not manicuring it. Their publicist isn't writing up for their social media account. It is right in the wake of what's happened."

At the end of the day, the journalists Newsy spoke with say Osaka's decision should help reporters, sports organizations and athletes take stock of their transactional relationship and find the best way to generate interest and tell the athletes' stories.