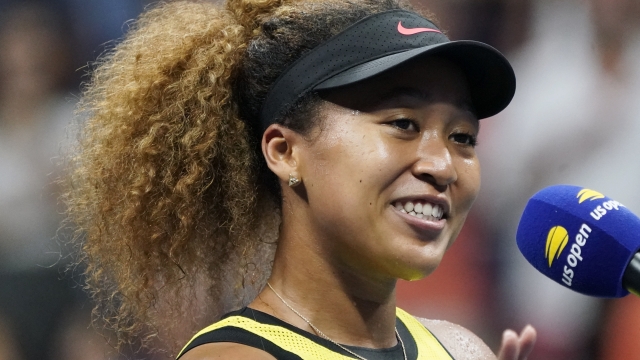 The tennis star was fined for skipping a post-match interview due to her anxiety and pulling out of the French Open and Wimbledon.

Here's the realization Naomi Osaka came to, gradually and only recently: If other people think a lot of her, she probably should, too.

"Hearing a little kid telling me that I'm their favorite player or I'm a role model, instinctively the first thought in my mind is, like, 'Why?'" Osaka explained as Monday turned to Tuesday after a successful start to her U.S. Open title defense. "I feel like I have to sort of embrace more ... the honor that they're telling me that, and I should believe more in myself. I feel like if you don't believe in yourself, then other people won't believe in yourself."

During her return to Grand Slam action after a mental health break — an at-times-dominant 6-4, 6-1 victory over 87th-ranked Marie Bouzkova of the Czech Republic — Osaka heard the high-pitched voice of one such "little kid" in Arthur Ashe Stadium.

When the match ended, Osaka went over with a little gift: one of the Olympic pins athletes collect.

With a bit of self-deprecation, Osaka noted that she didn't stick around at the Tokyo Games long enough to trade away all of those mini-souvenirs (a native of host country Japan, she was granted the honor of lighting the cauldron at the opening ceremony, then lost her third-round match).

The Summer Olympics marked her first competition anywhere since May 30 at the French Open.

That day, Osaka skipped her mandatory news conference after her first-round victory in Paris, drawing a $15,000 fine and a warning from the heads of the Slams that she could face a suspension. She responded by pulling out of Roland Garros, explaining that she feels anxiety when speaking to the media and has dealt with depression for years. Osaka then sat out Wimbledon, too.

The 23-year-old is clearly introspective and thoughtful, someone who is getting more and more used to sharing her innermost ideas with the rest of the world. In a social media post Sunday about ruminations on self-worth, Osaka wrote that she's "gonna try to celebrate myself and my accomplishments more, I think we all should" and that she "can't burden myself with (others') expectations anymore."

On Monday, she entered Ashe with her usual first-round Slam jitters, but not because of any sense of pressure to win, Osaka said afterward.

Instead, it was based on a desire to play well, especially for the loud and appreciative full house that was there a year after she won the title in a nearly empty arena because spectators were banned then amid the coronavirus pandemic.

"I tell people that I'm a perfectionist. I think for me, something that's less than perfection, even though it might be something great, is a disappointment. I don't really think that's a healthy way of thinking, so something that I really wanted to change," said the third-seeded Osaka, who next faces 145th-ranked Olga Danilovic.

"In this tournament I just want to be happy with knowing that I did my best and knowing that even though I didn't play perfect, I was able to win a match in two sets. ... It's more like a life thing," she continued. "Like, I hope I can keep this mindset throughout my life going forward."

Maybe she wasn't perfect against Bouzkova, who is now 1-11 in Slam matches. After all, the score was 4-all in the early going. From there, though, Osaka reeled off eight of the last nine games.

Helped by a serve that reached 120 mph, she saved all eight break points she faced and accumulated a 34-10 edge in total winners.

"Last year, when we didn't have a crowd, I know it felt quite lonely for me," she said with a smile during her on-court interview. "I'm glad to see little kids in the audience — and, of course, grown-ups, too."

Osaka improved to 55-14 in matches at the majors, including 22-3 at the U.S. Open as she tries to become the first woman with consecutive trophies in New York since Serena Williams collected her third in a row in 2014.

Osaka beat Williams in the chaotic 2018 final in Ashe. She also has won hard-court major titles at the Australian Open in 2019 and this February.

"I've played a lot of matches on this court," Osaka told the Ashe fans. "Definitely, I feel really comfortable here."