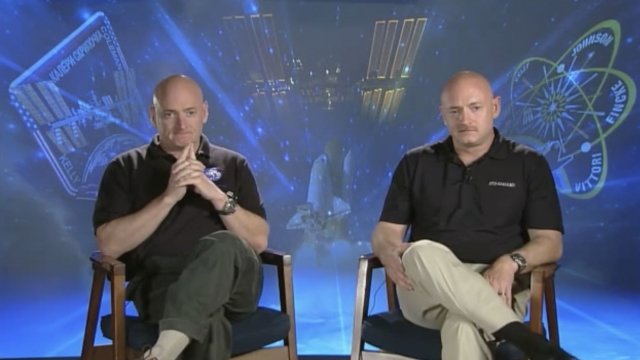 NASA has been studying the Kelly twins — Scott, who spent a year in space, and Mark, whose body served as a comparison on Earth.

The space agency knows if it wants to send astronauts deeper into space, it needs to have a better idea of what will happen to their bodies.

That's why NASA has been studying the identical Kelly twins — Scott, who spent nearly a year in space in 2015 and 2016, and Mark, whose body served as a comparison on Earth.

We should note all twin studies are correlational — and Mark Kelly is a former astronaut with flight experience himself — but a NASA principal investigator said, "this study represents one of the most comprehensive views of human biology."

Scientists have been comparing biological samples since Scott Kelly returned to Earth in March 2016, and they've found genomes are one of the many things that seem to change in space.

Principal investigator Chris Mason said: "We really see an explosion, like fireworks taking off, as soon as the human body gets into space. We've seen thousands and thousands of genes change how they are turned on and turned off. This happens as soon as an astronaut gets into space, and some of the activity persists temporarily upon return to Earth."

NASA Has A Better Idea How Humans, Weather Shift The Carbon Cycle

A natural cycle helps regulate the carbon in our atmosphere, but humans are knocking it off balance with emissions, according to NASA.

Early results seem to show these genes are activated and shut down through a process called methylation.

In a way, NASA's just previewing its findings, with the final results of the study expected to come next year.