NASA Is Looking At Jupiter Instead Of Fireworks On July Fourth 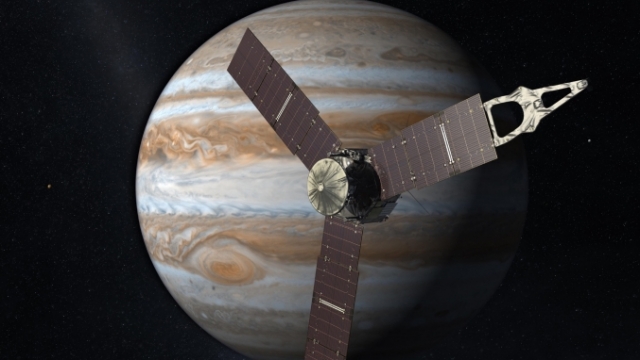 NASA's Juno orbiter will get closer to Jupiter than any other satellite on July Fourth. Scientists hope for answers about the gas giant's origins.

Most people looking up at the sky tonight will be enjoying fireworks. But NASA scientists are hoping for an entirely different display for the Fourth of July.

Around 11 p.m. CST, NASA’s Juno orbiter will get closer to Jupiter than any other satellite has before, circling as close as 2,600 miles from the top of the gas giant's clouds.

It took nearly five years and more than 2 billion miles of flying, but Juno is expected to send back the best photos of Jupiter we've ever seen.

SEE MORE: "What The Hell Is This Noise Jupiter's Making?"

It's not just a sightseeing mission for Juno. It's aiming to get details about Jupiter's composition, which should help scientists figure out how it was formed. That is, if the spacecraft survives.

All of Juno's sensitive scientific equipment is encased in a 400-pound titanium vault to defend against Jupiter’s magnetic field, but little bits of rock or dust could still do a lot of damage to a craft traveling 130,000 mph.

If the mission goes smoothly, Juno will give researchers the first close look at what's going on beneath Jupiter's clouds. Scientists are hopeful it will shed light on how other planets developed.

Since Jupiter is made of gas, Juno can't land, so the orbiter will have to take its measurements from a distance. It will continue orbiting the gas giant until it's scheduled to run into Jupiter's clouds and be incinerated in 2018.