NASA MAVEN Mission Aims To Find Out How Mars Dried Up 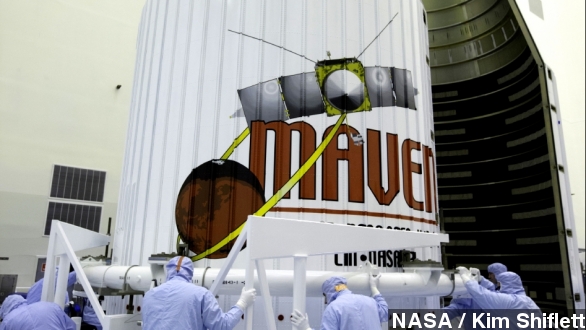 NASA's MAVEN mission seeks to find out what happened to Mars's atmosphere and water.

NASA's MAVEN mission to Mars is set to launch Monday, and hopefully it will answer one of our biggest questions about the red planet — what happened to all the atmosphere?

Although Mars is a barren and inhospitable wasteland today, scientists believe the planet once had a thick, Earth-like atmosphere billions of years ago, complete with rivers, lakes, and clouds. (Via Space.com)

But over time, Mars changed from a wet planet to a dry desert, and MAVEN's mission is to find out why.

"MAVEN will look at specific processes on Mars that led to the loss of much of its atmosphere, and MAVEN data could tell scientists a lot about the history of climate change on the red planet." (Via NASA)

Building on information uncovered by NASA's Curiosity rover, MAVEN will examine the remnants of Mars's atmosphere, along with the solar wind particles bombarding the planet, to determine how Mars lost its atmosphere. The mission's lead investigator Bruce Jakosky says MAVEN's findings could shed light on whether the red planet might have supported life. (Via The New York Times)

"It's gone from that polar, sterile desert ... to this exciting, blooming world with a history that does include warm, wet times, climate change, dynamic atmospheres." (Via CNN)

NASA rolled their Atlas V rocket onto the launchpad Saturday in preparation for Monday's launch. The probe will take about 10 months to reach Mars, and NASA says MAVEN should be able to orbit the planet for almost a decade after that. (Via Central Florida News 13)

But while the spacecraft isn't expected to run into any problems Monday, MAVEN's future looked much bleaker one month ago.

The recent government shutdown furloughed almost every NASA employee involved in the MAVEN mission, and the orbiter's launch date was almost pushed back to 2016. However, MAVEN's mission was deemed essential by NASA executives, and MAVEN personnel were able to get back to work after a few days. (Via Popular Science)

If the mission is successful, MAVEN will join three other satellites and two rovers currently studying Mars. India's first satellite to Mars is scheduled to arrive shortly after MAVEN.