An Asteroid Possibly Worth $10,000 Quadrillion Is NASA's New Mission 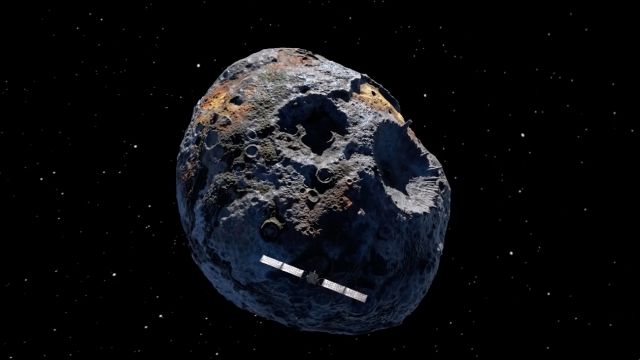 The hulking celestial body is believed to be composed almost entirely of metal.

Forget the Mars, Jupiter and Milky Way missions. NASA is now setting its sights on an asteroid, and it's not just any asteroid.

It's called 16 Psyche and is believed to be made almost entirely of nickel and iron.

Most asteroids are made up of rock or ice. So researchers think this trip to Psyche could help us learn more about Earth's core, which is also thought to be composed of similar metals.

NASA also wants to know if Psyche is actually a core of an early planet that could have broken off billions of years ago.

NASA's Next Mission Turns To Space's Most Extreme Environments

The agency plans to launch three telescopes to look at objects like neutron stars, pulsars and supermassive black holes.

Currently, the asteroid is the only place known to researchers where they could study what's believed to be an exposed metallic core without having to dig like they would to reach the Earth's.

The space program is teaming up with researchers from Arizona State University for the robotic mission, which will launch in 2023.

Right now, there aren't any plans to mine or land on the asteroid. But the mission's lead scientist estimates the iron alone could be worth as much as $10,000 quadrillion.