How Does NASA Transport A Massive $9 Billion Telescope? 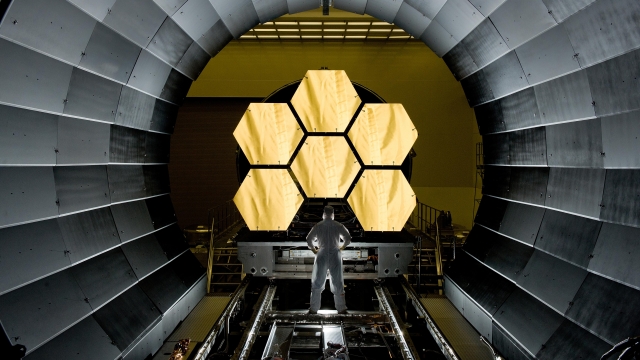 NASA's James Webb Space Telescope will have quite the journey before it even launches into space.

Launching a rocket isn't easy. But transporting a $9 billion space telescope around the Western Hemisphere before it's launched can be even harder.

NASA's James Webb Space Telescope will travel 1 million miles from Earth in 2018 to peer into the farthest depths of our universe. But before that, it has to make the nearly 3,000-mile trip across the U.S. and down to South America.

First, NASA will put the telescope in a special shipping container and load it on a truck. In the dead of night, it will travel 16 miles in Maryland from the Goddard Space Flight Center to Joint Base Andrews — at a measly 4 mph. Then, it'll be loaded on a C-5 Galaxy transport plane and fly to Johnson Space Center in Houston.

NASA Is Putting The Earth Up For 'Adoption'

NASA is celebrating Earth Day by putting pieces of the Earth up for adoption for free.

After it's tested to make sure it can handle the launch, the James Webb will go back into its shipping container and be flown to California for final assembly. Finally, the giant telescope will travel by ship down the California coast, through the Panama Canal and to its launch site in the country of French Guiana. The Earth spins faster at the equator, which will give the telescope an extra push into space.

It seems like a lot for one telescope. But the James Webb is so massive it has to be assembled and tested in parts. And it can't fit in a plane when it's all put together. The telescope has to fold itself up to even fit inside its rocket.

With such a complex travel itinerary, NASA will need to take extra precautions to make sure nothing goes wrong. The James Webb may be a big piece of equipment, but it's still extremely fragile. Any damage to the telescope during transport could mean costly repairs.