NASA's MAVEN Begins Mission To Study Why Mars Dried Up 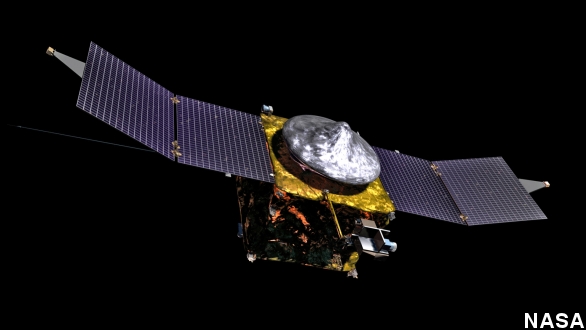 The latest mission to the red planet will study Mars' remaining atmosphere, seeking to discover where the rest of it went.

NASA's newest spacecraft lifted off Monday afternoon, beginning a 35-million-mile trip to Mars to solve one of the Red Planet's biggest mysteries.

The Mars Atmosphere and Volatile Evolution, or MAVEN, mission will attempt to discover why Mars is a dead, dry planet, instead of the hospitable one it once was. (Via HLN)

Scientists believe Mars was once not so different from Earth, with a dense atmosphere and liquid water flowing on its surface. So what happened? (Via NASA)

The current theory is that all of that liquid water and atmosphere simply evaporated into space, blown away by solar wind. That's the stream of charged particles that pours out of the sun — and the same force that strips material from comets into long, bright tails. (Via NASA)

MAVEN will test that theory by dipping down into Mars's thin existing atmosphere and seeing how it interacts with the solar wind today. (Via NASA)

Corey Powell: "This is almost the exact opposite of the Curiosity rover. ... It's designed to do everything that Curiosity can't do. It's looking at the atmosphere, it's trying to figure out how water and gases escaped from Mars." (Via Fox News)

MAVEN, Curiosity and other upcoming NASA missions are all part of President Obama's goal of sending humans to Mars by 2030. If the agency wants to succeed in that mission, it needs to know everything there is to know about the Red Planet, including its soil, atmosphere, geology and more.

Monday's launch went off without a hitch, setting MAVEN on course to arrive at Mars in September of 2014.