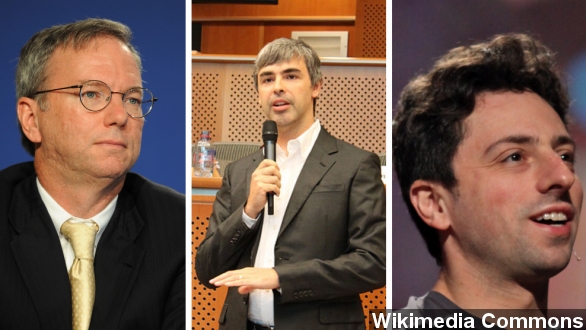 How great would it be to get millions of dollars in discounts on gas for your business travels for no reason at all?

Well, according to NASA, you're going to have to ask the executives of Google to find out. (Via YouTube / zeitgeistminds)

"A NASA audit found that Google co-founders got fuel at a discounted rate usually saved for government contractors." (Via KGO-TV)

The planes were stored at NASA's Ames Research Center in Silicon Valley. Private company H211 manages some of Google's private planes and was leasing one of the hangers at Ames for Google's aircrafts. (Via NASA / Eric James)

Eric Schmidt, Larry Page and Sergey Brin make up the top executives of Google Inc., the most popular search engine in the country. (Via Google)

According to the audit, these gentleman, whose net worth is about $56 billion combined, enjoyed a discount on jet fuel between September 2007 and August 2013 worth up to $5.3 million. (Via CNN)

The audit goes on to say the discount on fuel didn't cause a loss for NASA and was a "misunderstanding ... rather than intentional misconduct." (Via NASA)

The original agreement was for NASA to use one of Google's planes for research and Google pay NASA $1.4 million per year to use the 700,000-square-foot hangar. When NASA used a plane for research, it filled up that plane with the jet fuel discount it is entitled to.

The problem is when the Google executives flew to places like Hawaii, New York and Los Angeles for business or pleasure, they filled up their tank with the same discount. Oh, and California taxpayers flipped the $5 million bill. (Via YouTube / wcolbyHD)

The audit calls for NASA to "explore with the company [H211] possible options to remedy this situation." (Via NASA)

Google's lease with NASA expires this summer, but don't worry about the tech giant. They'll be fine just as soon as they finish their own personal $82 million hangar at the San Jose Airport. (Via ABC)