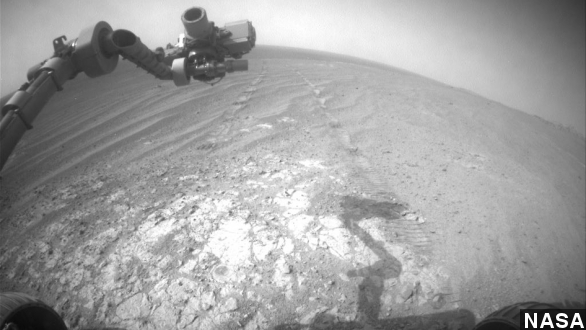 NASA believes the Mars rover Opportunity has been sending important measurements to data storage that gets wiped every time it powers down.

It's provided us with some of the most stunning ground views of a foreign planet ever taken, and that's to say nothing of the discoveries NASA scientists say the Mars rover Opportunity has made over the past 10-plus years. (Video via NASA)

But the rover that just won't stop now appears to have amnesia just as NASA says it's on the verge of some of its most exciting finds.

Nearly three weeks ago, NASA announced Opportunity was having trouble with its memory. Something was wrong with one of its seven banks of nonvolatile memory — the more permanent storage where Opportunity keeps the measurements the rover's collecting.

Instead, Opportunity was trying to send some of that data into its volatile memory, which acts more like a computer's RAM storage and gets wiped every time the rover powers down. (Video via NASA)

NASA's rover project manager told told Discovery: "Basically the rover stops what it was doing because it wasn't sure what caused the reset. It's like you're trying to drive on a family trip — the car stalls out every 5 minutes. You don't make much progress that way!"

So scientists had to figure out a fix for what they've dubbed amnesia. They believe they've developed software that should be ready to upload in a couple of weeks that will bypass the one glitchy memory bank — effectively hacking the rover to fix it.

As we mentioned, getting the rover back up and fully healthy couldn't come at a much better time. Less than half a mile from Opportunity's current location at Endeavour Crater, scientists desperately want to make it to an area they've named Marathon Valley. The area has clay deposits that could've been formed by pH-neutral water on the terrain's surface. Read: an ancient habitable environment. (Video via NASA)

Let's keep in mind when they landed on Mars in 2004, rovers Spirit and Opportunity were each only supposed to work and collect data for three months. Spirit made it six years. Opportunity is still working. (Video via NASA)

This video includes images from NASA and music from Chris Zabriskie / CC BY 4.0.