NASA Is Trying To Get Supersonic Commercial Flight Off The Ground 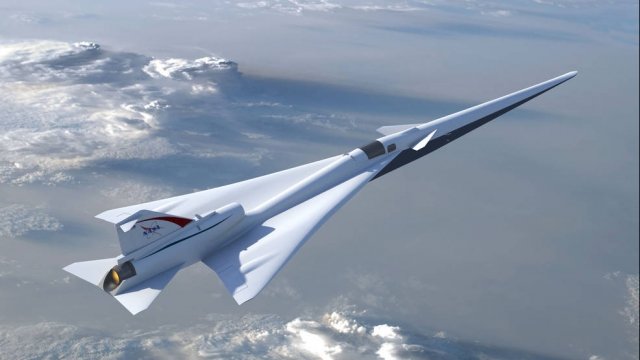 Companies like Boeing and Lockheed Martin may go head-to-head to win a contract to build a supersonic civilian aircraft for NASA.

The Federal Aviation Administration banned civil supersonic air travel over the U.S. in 1973. Aircraft traveling faster than the speed of sound create a sonic boom that can cause major disturbances down below.

But NASA has tried for years to get commercial supersonic air travel off the ground, and it's finally getting closer. The space agency will start taking bids to build prototypes of low-boom supersonic aircraft in August.

After being tapped by NASA in February 2016, Lockheed Martin put together a preliminary design for a supersonic aircraft that sounds more like a thump and less like the sky is falling.

Bloomberg reports Lockheed's design changes the merging pattern of a sonic boom, keeping the shocks dispersed behind the plane rather than concentrated under it. A scale version of that design completed testing in a supersonic wind tunnel in May.

Companies like Boeing, Boom Technology, Aerion, Lockheed Martin and others could compete for a contract to make a more detailed design and then build the low-boom supersonic aircraft.

After that, NASA will conduct test flights across the U.S. The hope is the FAA will use that data to eventually lift the ban on supersonic commercial travel.