You Can Soon Own The Record NASA Created For Aliens 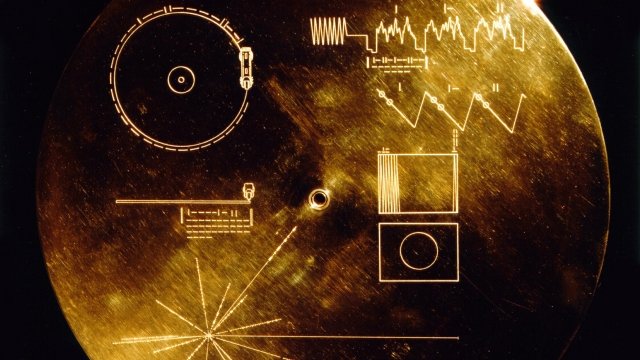 Back in the '70s, NASA mounted copies of the "Golden Record" to spacecraft with the hopes of aliens hearing sounds of Earth.

What does Earth sound like? NASA created a planetary playlist in the '70s, and soon the public will be able to own it.

NASA created two identical copies of the "Golden Record" on gold-plated copper discs and attached one to each of its Voyager spacecraft.

The idea was if an alien civilization intercepted one of the Voyagers while it traveled through deep space, it could play the record and get an idea of what Earth was like.

Our Lonely Galaxy Probably Exists In The Middle Of Cosmic Nowhere

Our planet is full of life, but our galaxy is a different story. New research suggests we probably live in the middle of an intergalactic void.

Tracks include greetings in 55 languages; sounds of daily life, like babies crying, dogs barking and trains running; and music, including classical, jazz and rock.

NASA had to create illustrated instructions to help aliens get all the data off the discs.

But it's a lot easier for humans to listen. After a successful Kickstarter campaign, Ozma Records will release the "Voyager Golden Record" on CD in December and vinyl in February.

Ozma's reproduction will include all the audio of the Golden Record, as well as an accompanying book that includes the images encoded on the discs and photos the Voyager probes have sent back from space.