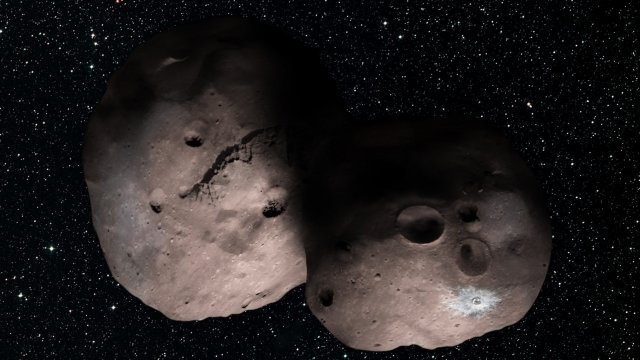 NASA's New Horizons craft is going to fly by a distant object in 2019. In the meantime, NASA wants the public to help give the target a better name.

NASA's New Horizons spacecraft is zooming toward the outer edge of our solar system, and on New Year's Day 2019, it'll fly past MU69.

NASA isn't totally sure what MU69 is. It could be a pair of frozen bodies orbiting each other; a single body; or even a system of objects. So NASA might need a nickname with options.

A NASA-backed study looked at astronaut brains before and after different durations of spaceflight.

Eight names are already being considered. Contenders include Año Nuevo (New Year), because the flyby will be on the first day of 2019; and Peanut because of the possible shape of MU69. And if it's multiple objects, the others could be named after other nuts, like Almond or Cashew. But as of Tuesday morning, the suggestion leading the pack was Mjölnir — Thor's hammer.

NASA is accepting nickname submissions and votes until Dec. 1. After the space agency looks at the top choices and picks its favorite, it will announce the winner in January 2018.