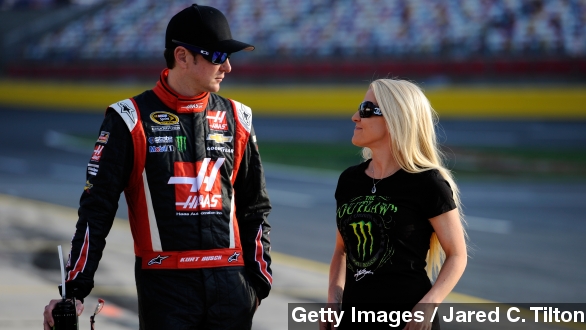 NASCAR has suspended Kurt Busch indefinitely. The quick suspension shows leagues don't want to be perceived as soft on violence against women.

One of NASCAR's most popular and successful drivers in recent memory may not race in 2015.

Busch has not been charged with a crime, but a judge determined Busch choked his ex-girlfriend Patricia Driscoll in September while the two were in Dover for a race. Busch and his attorney denied the allegations when the driver testified at a court hearing in January. (Video via WBOC)

"I'm just glad that the truth got told and that we'll wait on the commissioner's decision," Busch told reporters. (Video via WMDT)

But in the larger climate of athletes accused of wrongdoing, NASCAR appears to be learning from — or at least, not resisting — a hard lesson from another sports giant.

The NFL came off as negligent at best and purposefully turning a blind eye at worst this fall as allegation after allegation came down against star players, including Ray Rice and Greg Hardy for domestic violence. Prosecutors also charged Adrian Peterson for hitting his son with a switch. (Video via TMZ)

"We've acknowledged we need to change what we're doing. Now, we have to get to what are those changes going to be," NFL Commissioner Roger Goodell told reporters in September.

NFL Commissioner Roger Goodell admitted he could've handled Rice's case better, the league toughened penalties for domestic violence and the NFL partnered with the No More Project to raise awareness. Still, the long-term damage for the NFL is obvious, and it'll likely be awhile before fans see the NFL as anything but soft on violence against women. (Video via Fox Sports & NoMore.Org)

This is exactly the kind of climate NASCAR, other sports leagues and — perhaps just as influentially — their sponsors don't want to wade into.

"The current climate with everything that is going on with domestic violence and, especially what occurred in the NFL, I think absolutely played into NASCAR's methodology in looking into this situation," ESPN's Marty Smith said.

Chevrolet also immediately suspended its sponsor relationship with Busch on Friday saying it would monitor what happens in the driver's case. (Video via Chevrolet)

Since Driscoll told police Busch choked her, both sides have accused the other of lying — the most bizarre twist coming when Busch said his ex was a trained assassin.