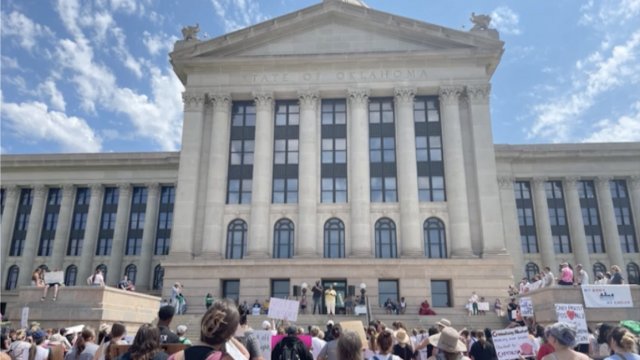 A Choctaw citizen living in Oklahoma says the state's abortion ban is disproportionately affecting her community.

Blu Cornell is a 21-year-old Choctaw citizen living in Oklahoma City with her mom and two sisters. She’s a student, artist and is part of an organization called Matriarch. It’s a group of Indigenous women who organize around social issues, like raising awareness about violence against Native women, teaching classes about wellness and sexuality and reproductive justice.

She remembers the moment she heard the news that Roe v. Wade had been overturned.

Oklahoma passed one of the strictest abortion bans in the nation. Cornell worries what will happen to her if she were to become pregnant while living there.

"So if I were to get pregnant right now, I would not be able to carry out the pregnancy because, one, I'm not financially stable enough to be able to support a child right now," Cornell said. "I'm not at the best point of my life right now where I would be able to carry out a pregnancy and bring life into this world. I would have to travel out of state to go to a clinic where they would offer those services to me, where they should be provided here in the state because they're necessary and they're safer. "

She and her friends are part of a younger generation of Native women who are pushing for more change within their tribal nations, trying to put pressure on elected leaders to make more comprehensive reproductive services available to Native women — including abortion.

"Indigenous people are probably at the most risk right now because whenever we are seeing these things being put into place about abortion access, usually if a state is protected by it, it means people have to travel out of state to go get those services," Cornell said. "And, usually it's only people who can afford it, which means that Brown and Black women are probably going to be the ones who will not be able to afford it the most. Especially Indigenous women, because we have such high rates of poverty and being able to access these resources is going to be much harder for us as a people, so that's another thing that's important to consider — who these laws are disproportionately affecting and which communities it's hitting the hardest."