NATO Ministers Say Alliance Important As Ever, Despite Pressures 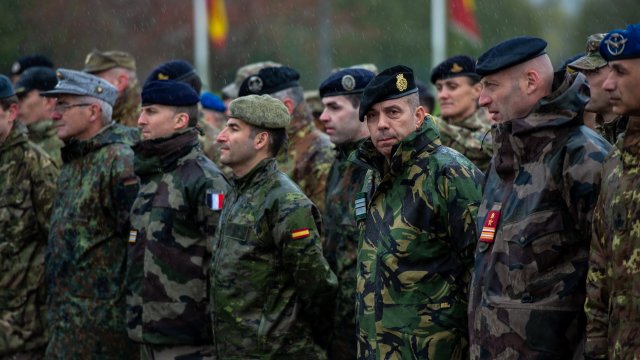 On NATO's 70th anniversary, foreign ministers from around the 29 member states still say they're committed to maintaining the alliance.

Here at the State Department, foreign ministers from around NATO's 29 member states are all gathering to mark the 70th anniversary of the alliance — and to shore up what's become an increasingly fractured coalition of nations over the past few years. It has face a lot of pressure in recent years, both from external threats like Russia, but also internally from U.S. President Donald Trump, who's been very insistent that every NATO ally must pay their fair share.

Linas Linkevičius, the foreign minister for Lithuania, told Newsy Trump is "right, in short. Maybe language he uses for some things sounds quite offensive. But he's right, because it's not fair."

Newsy spoke with the foreign ministers for Lithuania and the Czech Republic about how President Trump's rhetoric has affected the alliance — and what NATO membership means to their country.

Tomáš Petříček, the foreign minister for the Czech Republic, said: "I lived in NATO. I was 18, when we joined in 1999. ... For me, it's important that we don't take what NATO provide us for guarantee."

"It's important that we have strong partners, strong allies, that we have friends we can rely on. And this is making us one of the safest country in the world."

Both Lithuania and the Czech Republic region were under Soviet Russia's influence during the Cold War. Once the U.S.S.R. broke up, NATO membership came to be seen as a path to security and stability for former Soviet-dominated states.

Linkevičius told Newsy: "We had always uncertainty for the future, always future was decided by somebody else, or something else. ... So after establishing of independence, 1990, we looked for the ways how to guarantee our security."

Trump's past skepticism of the alliance has encouraged more European countries to revitalize their defense spending. By the end of next year, the defense budgets of NATO countries outside the U.S. are projected to have risen by $100 billion since Trump took office.

Both Lithuania and the Czech Republic say they're on track to hit NATO's target of spending 2 percent of their annual GDP on defense by 2024. But that's not the case for everyone — Germany is expected to miss to even their more modest aim of hitting 1.5 percent in five years.

But for both Lithuania and the Czech Republic, NATO's importance extends beyond the spending targets.

Petříček told Newsy: "It's only one part of the commitment we have. We are also serving together with American and other troops. In many places in the world, where we want to have more stability like in Afghanistan, and we are paying the ultimate price."

And Linkevičius said: "It's not just cash, it's contributions, attitudes, it's sharing the same priorities, and, frankly, implementing commitments, which we agreed before."