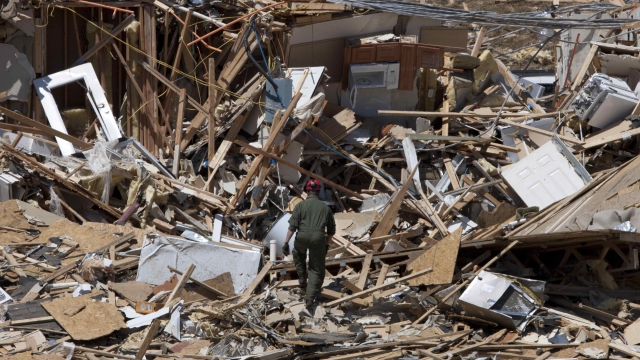 With the rise of climate change, more severe natural disasters are happening each year, and the stats show that many communities impacted aren't getting the help they need.

According to the National Centers for Environmental Information, in 2021 there were 20 natural disasters exceeding $1 billion in damage each. Back in the 80s and 90s, there were only a handful of these each year.

To put this into perspective, Newsy conducted its own data analysis, comparing the two most recent decades on record.

This is notable because Hurricane Katrina happened in 2005, which was the single most expensive disaster to date.

With this increase in disasters, government aid is needed now more than ever.

But a recent NBC analysis found that after these disasters, the Federal Emergency Management Agency often rejected aid to marginalized communities. The majority of the counties denied had poverty rates higher than the national average.

To understand why this is, let's walk through the aid application process.

Carlos Martín, a researcher at Brookings Institution who studies the cost of natural disasters, points out that after a disaster, the governor of the state has to request a disaster declaration from the president. That would allow residents to apply for FEMA's individual assistance program, which helps the uninsured or underinsured.

"When you're dealing with lower income people, people with lower resources and people who live in historically disinvested communities, they're going to have a harder time, and those are the people that are most likely to need the aid," Martín said.

But between fall 2018 and fall 2021, about 40% of declarations requested from governors were denied by FEMA, so people living in those areas were not eligible to apply for federal aid.

When FEMA denies governors' requests, they often say the disaster was not severe enough, even if dozens of residents are left without a roof over their heads.

The responsibility also falls on the states to help provide aid after disasters, but many states don't have sufficient funding either.

With limited options, it can be difficult to meet basic needs. People have an even harder time if they don’t own the place they live and have to wait for their landlord or property manager to rebuild their home. They face challenges finding somewhere to go in the meantime.

"If you're a renter, you're out of an apartment and there aren't a whole lot of other apartments in your area because everything has been downed," Martín said.

On the flip side, FEMA's National Advisory Council stated in a 2020 report that their recovery programs "provide an additional boost to wealthy homeowners and others with less need, while lower-income individuals and others sink further into poverty after disasters."

That wouldn't be the first time they have been accused of that. A study from 2019 found that Hurricane Harvey survivors in Houston were less likely to receive grants if they lived in neighborhoods with more racial diversity compared to areas with more white residents and financial resources.

Newsy reached out to FEMA for their take on all of this. They responded with a statement, saying:

"Advancing equity for all survivors especially in those historically underserved and low-income communities is our primary goal... We’re leaving no stone unturned when it comes to helping socially vulnerable communities and survivors, and efforts that require statutory or regulatory changes are also on the table."

There have also been bills introduced to deal with this issue, like the Fairness in Federal Disaster Declarations Act by Sen. Dick Durbin, and Sen. Tammy Duckworth. It hasn't gained momentum, but its goal is to reform FEMA's disaster declaration process to make it more equitable to small and rural communities. Sen. Durbin first introduced the bill in 2012 after FEMA denied aid to two counties in his home state of Illinois after an outbreak of tornadoes.

There are many expenses to consider here, and it's not just after storms hit; it's also the cost of evacuation and how expensive that can be.

If you're displace and don’t have family or friends close by, you would have to get a hotel and pay for food. Several studies have shown that about half of Americans do not have enough saved in the case of an $1,000 emergency.

Some people have no choice but to stay. All of these costs associated with disasters can leave people with nowhere to turn.

"I think we have to think about all the opportunities and spend the money before an event in these communities and for these households other than wait until the crisis," Martín said.