Even With Loose CO2 Rules, The US Could Still Hit Paris Climate Goals 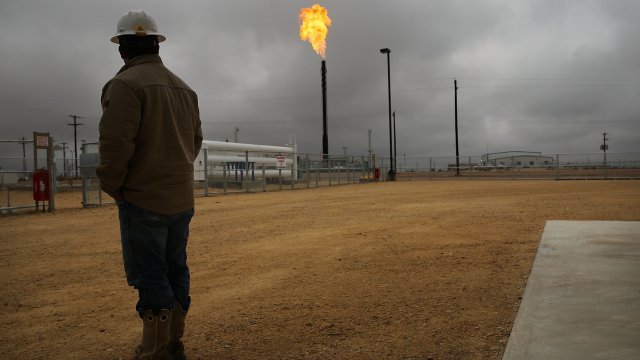 Because natural gas is cheap right now, power plants are using less coal, and their emissions have plummeted.

Could the U.S. hit its Paris climate agreement goals without help from the White House? Researchers from Carnegie Mellon University say it could be possible, thanks largely to natural gas.

Power plants emit more than a third of the country's carbon dioxide. Under Obama-era regulations, they were supposed to cut back 32 percent from 2005 levels by 2030, with benchmarks in 2020 and 2025. That cutback alone could get the U.S. as much as halfway toward the Paris agreement goals.

Of course, the Trump administration pulled the U.S. out of the Paris climate agreement and has rolled back most of the key regulations President Barack Obama put in place.

The US Will Battle Climate Change Without Washington's Help

But power plants, at least, are still on track. Natural gas doesn't contribute as much CO2 to the atmosphere as coal, and thanks to how cheap natural gas has become, more and more power plants are making the switch.

Beyond that, it gets a little iffy. The Carnegie researchers say a few things have to happen to make the 2030 goal a reality, and some of those things do require the federal government's help.

For instance, tax credits for renewable energy need to stay in place. Those credits were threatened in the recent Republican tax bill but have survived for the time being. And any energy policy out of Washington will have to keep natural gas cheap.