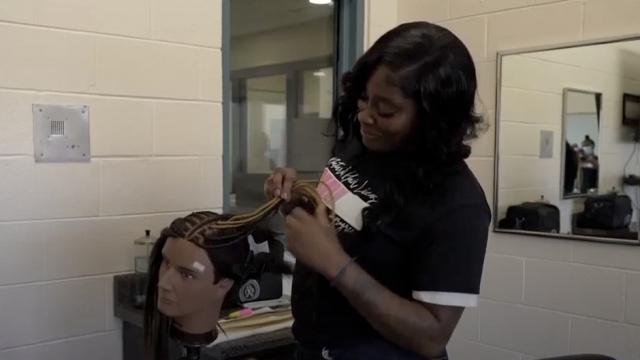 The 300 hour program through the Shelby County Division of Corrections educates and prepares inmates for a career in hair care once released.

In Memphis, Tennessee, the Shelby County Office of Re-Entry — under the Division of Corrections — is rolling out a newly developed program that trains women in natural hair care.

Zana Smith is one of the four incarcerated women that recently graduated from the program and now hopes to open her own shop one day.

She's tried enrolling in hair schools before but says they never worked out, until now.

"I've been to two hair schools, and I haven't completed," Smith said. "It's just so ironic. I go to jail, and I complete it and graduated with most improved."

The program targets women that are more likely to re-offend and can only take as many as ten inmates. In order to graduate, they must complete 300 hours of training.

DeAndre Brown is the director of the Shelby County Office of Re-Entry, and he says the program — which is federally funded — is designed to set these women up for success before they are released.

"We believe that we can use our captive audience to create change agents," he said. "If we use our resources well and their time wisely, we have the ability to create a new generation of people that can come out and affect their communities in a positive way."

The U.S. has one of the highest recidivism rates in the world, making programs like this one critical.

According to the Department of Justice, about two-thirds of prisoners will likely be arrested again within three years of being released.

Tamika Turner is the owner of Tennessee's first natural hair school, The Institute of Beauty, and she's one of the program's instructors.

"This is their five hours of freedom. Five hours to prepare them to go back to the community and not return here again," Turner said. "When they leave here, they're going to have a career where they don't have to be judged on their application."