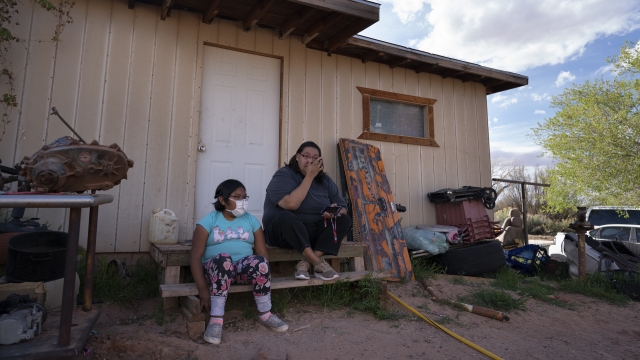 The Native American territory, which covers parts of Arizona, Utah and New Mexico, now has America's highest per capita level of COVID-19 cases.

The Navajo Nation is scattered throughout remote reservation land in Arizona, neighboring Utah and New Mexico. In geography and character, it's as far removed from New York as most anyone can imagine.

But this Native American territory of 174,000 people has passed New York by recording America's highest per capita rate for the coronavirus.

Navajo Nation member Felisita Jones can attest to that. She is one of five people in her family infected by the virus.

The Navajo Nation is under strict lockdown. But this is not an easy landscape to be confined at home. With few grocery stores,  farmers in Arizona are shipping in fresh produce to tribal members.

Navajo Nation President Jonathan Nez says gas stations are closed. And there's another harsh factor about isolation — many families have no access to water at home.

What the Navajo do have is a very rigorous testing regimen. Nez says 11% of tribal members, more than 23,000, have been tested for COVID-19 so far.

But there's another challenge. Hospitals are hours away from most tribal homes. So the Army Corps of Engineers is building temporary medical facilities. The Navajo are hoping that testing — and sheltering — will keep them from filling up.