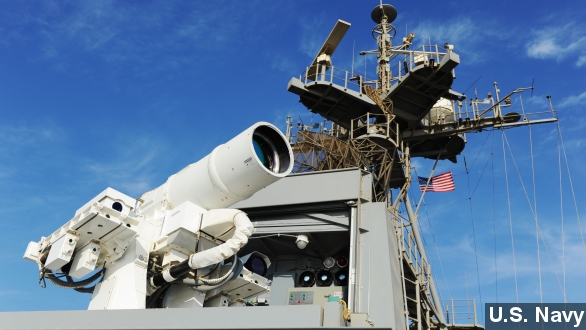 The LaWS laser gun spent several months deployed on a Navy transport ship, and the Navy can't say enough good things about it.

It looks like laser weapons are here to stay. The U.S. Navy says its test run of the Laser Weapons System, or LaWS, went off without a hitch.

This spring, we learned that LaWS was ready for a real-world deployment on the USS Ponce in the Persian Gulf, the result of a years-long push to develop naval laser weapons. (Video via U.S. Department of Defense)

The weapons fill a niche: The Navy already has big guns, but its ability to fight asymmetric threats — smaller craft like drones and small boats — can use some improvement.

That's where lasers come in. Not only are they good at sending smaller, lighter enemy vehicles up in flames, but they're also cheaper than, say, missiles and safer because they don't rely on explosive materials.

We've been seeing the fruits of the Navy's efforts for a while now. We first saw a laser weapon shoot down a drone in 2010 and watched an unmanned boat get its engines torched in 2011. (Video via YouTube / knightskross, BBC)

But this was the first time a real crew got to work with the weapon on a day-to-day basis, and according to the Navy's press release, it passed with flying colors.

The statement can't praise LaWS enough. It says "the weapon performed flawlessly" and quotes a rear admiral saying, "We ran this particular weapon, a prototype, through some extremely tough paces, and it locked on and destroyed the targets we designated with near-instantaneous lethality."

Translation: blowing up more drones and boats. That never gets old. But there's one unusual detail we noticed that might mean LaWS isn't quite ready for widespread use.

Who knows what the change in language means, but even if LaWS has some kinks to work out, we've got plenty of other Navy weapons to keep us in awe — like the magnetic rail gun that fires 23-pound projectiles at 5,000 mph.

This video includes images from the U.S. Navy and U.S. Air Force.