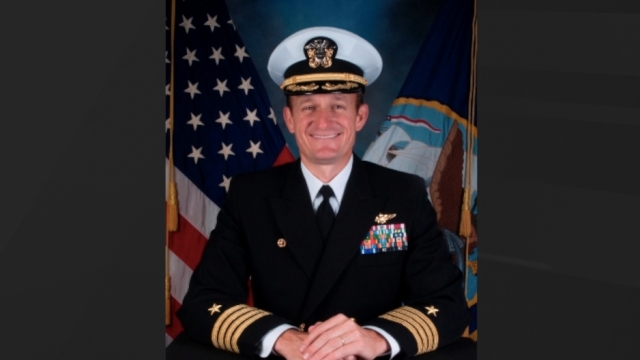 Capt. Brett Crozier sent a memo voicing concerns about COVID-19 aboard the USS Theodore Roosevelt, where at least 114 sailors are infected.

Navy Capt. Brett Crozier was relieved from command on Thursday after raising concerns about the coronavirus spreading aboard his ship. The aircraft carrier USS Theodore Roosevelt is docked in Guam.

On Sunday, Crozier wrote a letter to Navy leaders suggesting some 50 sailors could die. The memo, obtained by The Associated Press, said: "We are not at war. Sailors do not need to die. If we do not act now, we are failing to properly take care of our most trusted asset our sailors." One hundred and fourteen sailors on the USS Theodore Roosevelt have tested positive for coronavirus but none have been hospitalized.

Acting Secretary of the Navy Thomas Modly said Crozier's letter "created a panic" among the ship's 5,000 crew members and their families. He said while Crozier was "absolutely correct" in raising concerns, the way Crozier went about it showed "extremely poor judgment." Modly said the captain also shared the letter too broadly when he could have sent it through his chain of command or reached out to Modly directly.

Modly said Crozier being relieved was "not an indictment of character, but rather of judgment." NBC reports Crozier will keep his rank and remain in the Navy.

Some 1,000 sailors have already been taken off the ship, and more will be will be taken to be quarantined by Friday.

Additional reporting by Lolita C. Baldor and Robert Burns of the Associated Press.