Navy Fuel Leak Could Cause Water Crisis In Hawaii 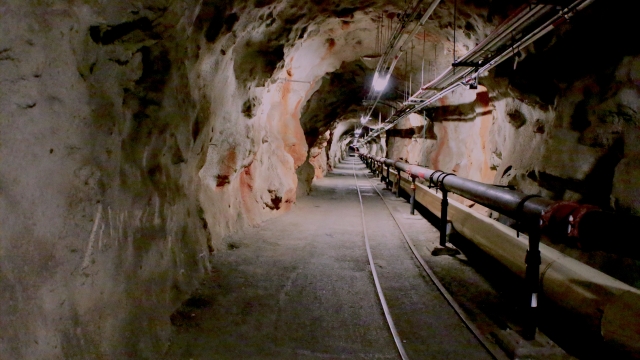 Earlier this month the Navy’s water system had petroleum levels hundreds of times higher than the state's recommended limit.

New developments are playing out around an important site in American history: Pearl Harbor.

The Japanese attack there in 1941 killed over 2,000 people and launched the U.S. into World War II. Even today, it's still the site of an active military base.

Just a couple of miles away from the memorial to the attack is Red Hill, an underground fuel storage facility that has existed since World War II and can hold up to 250 million gallons of fuel.

It's just one example of the aging military infrastructure we've seen across the country. Older fuel storage facilities are prone to leaks and have been shut down amid public pressure in places like Point Loma, California, and Manchester, Washington.

Red Hill is still open, and it also poses a very strong risk of affecting thousands more people. It's located just 100 feet above the aquifer that provides drinking water to much of the island of Oahu – home to Honolulu and just over a million people.

And the site has already leaked fuel.

As far back as 2014, oil has leaked out of Red Hill. It's a situation that, for years, civilians on the ground have warned — and military leaders have known – could get a lot worse.

In recent weeks, military families living on and near the base have reported sick pets and water that smells like oil. State health officials in Hawaii said earlier this month that the Navy’s water system had levels of petroleum hundreds of times higher than the state’s recommended limit.

The Navy shut down the affected well after those reports, but environmental advocates say that isn't enough.

Environmental advocates have called for the Navy to close the facility and the state’s leaders have pressured the Navy to address the issues.

Wayne Chung Tanaka is the Executive Director of the Sierra Club of Hawaiʻi. The environmental advocacy group has been pushing for military and civilian leaders to take drastic action.

"We've seen the Navy continue to engage up to the present day in this pattern of denying issues, downplaying concerns," Tanaka said. "Essentially repeating the same line that they'll somehow keep us safe, even as we are seeing repeatedly that they are simply not able to do so. There's really, at this point, only one thing that can protect us from catastrophic harm. The Navy needs to acknowledge that this facility, this 80 year old facility, is an existential threat to our water supply and our way of life and defuel the Red Hill fuel storage facility. Get the fuel away from our drinking water."

But it's tough for the Navy to fix this issue. The Navy has said it hopes to empty the tanks by 2045, but in the meantime, the facility’s design makes it basically impossible for Navy officials to access the concrete shells that hold the fuel in and fix them to stop leaks.

Defense Secretary Lloyd Austin said last week that he’s personally monitoring the situation and that DOD officials are working to address the problem.

The Deputy Secretary of Defense visited Hawaii last Tuesday and said that she met with state and local officials and that, "We also recognize we need to double down on our efforts to earn the trust and confidence of the people of Hawaii in our ability to manage this situation."

But it’s still a risk to civilians, because the military base and Honolulu region have basically the same water source – and contaminated water from the base can leak into the civilian supply. That's the drinking water for 400,000 people who live in the area.

Fortunately, there’s no evidence yet that the civilian water supply has petroleum in it, but the contamination risks getting so large that it might be impossible to fix just by treating the water.

So if this aquifer is unusable as a fresh water supply, it means the city might need to use other ones. But the problem with aquifers is that if the fresh water is used up too fast, they could start reaching down and getting saltwater from further below the surface.

It’s a different problem but it’s one that could make drinking water shortages for people on Oahu even worse.