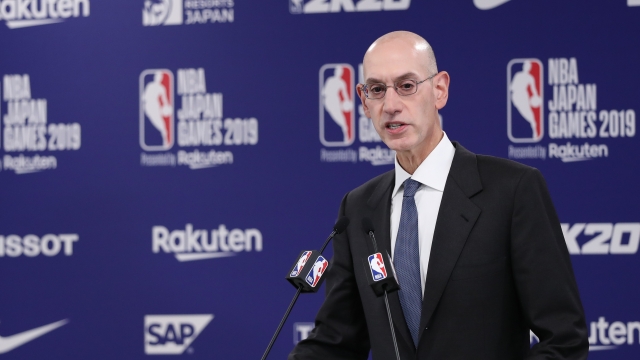 Adam Silver said he hopes China and the NBA's Chinese partners will consider the good that has come from their three-decade partnership.

NBA Commissioner Adam Silver said in a press conference Tuesday that the league won't apologize on behalf of Houston Rockets general manager Daryl Morey. But Silver said he does regret that Morey's tweet caused disruption and disharmony among fans and partners.

"We are not apologizing for Daryl exercising his freedom of expression. I regret, again, having communicated directly with friends in China, that so many people are upset, including millions and millions of our fans."

Over the weekend, Morey posted an image on Twitter that said, "Fight for freedom, stand with Hong Kong," a slogan that's been used during the city's pro-democracy protests. Following backlash across the country, the China Basketball Association said it would suspend all cooperation with the Rockets — the most popular NBA team in China. Morey apologized for offending anyone and said the public outcry helped him consider other perspectives about China and Hong Kong.

Silver said that the league stands by its employees' right to speak their minds.

But China Central Television, a state broadcaster, feels differently. It said in a statement: "We're strongly dissatisfied and oppose Adam Silver's claim to support Morey's right to freedom of expression. We believe that any remarks that challenge national sovereignty and social stability are not within the scope of freedom of speech."

At Tuesday's press conference, Silver also discussed the NBA's efforts to build communities and focus on healthy lifestyles through its three-decade partnership in China. He's traveling to Shanghai on Wednesday in the hopes of meeting with partners and finding common ground, even though he said he won't compromise on the league's values.

He said: "I am sympathetic to our interests here and to our partners who are upset. And I don't think that its inconsistent, on one hand, to be sympathetic to them, and at the same time stand by our principles."