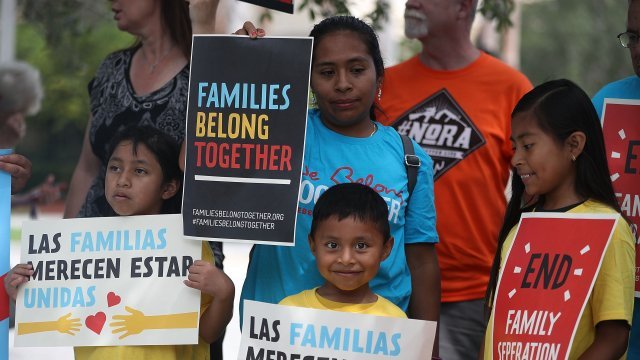 Hundreds marched outside government buildings in Washington, D.C., on Thursday.

Nearly 600 people were arrested at a protest organized by Women's March in Washington, D.C. Demonstrators began marching outside of the Justice Department and a Senate building Thursday to oppose migrant family separations and U.S. Immigration and Customs Enforcement, or ICE.

Democratic lawmaker Pramila Jayapal said she was among those arrested "who took over the center of the Hart Senate Building protesting the inhumane and cruel zero-tolerance policy of Donald Trump and this administration."

Protesters are calling for the abolition of ICE, which enforces the controversial zero-tolerance policy that has led to separation of over 2,000 children. President Donald Trump signed an executive order to stop separations, but the reunification process has proved to be complicated.

It also isn't clear if families who are kept together will remain so or be separated after 20 days due to an existing court order.

Thursday's protesters were joined by others around the country. More nationwide rallies are planned for Saturday, June 30, as part of a Families Belong Together event.