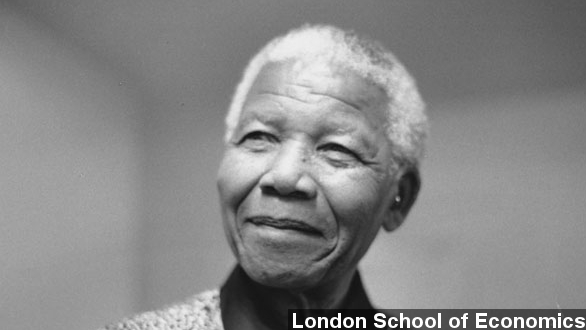 Anti-apartheid leader and former South African President Nelson Mandela has died at the age of 95.

Human rights icon Nelson Mandela has died at his home at the age of 95.

The anti-apartheid leader and former South African president had been receiving treatment at home following three hospitalizations in the first half of 2013. (Via Euronews)

ZUMA: "The founding president of our democratic nation has departed. He passed on peacefully in the company of his family." (Via Sky News)

In 1994, Mandela became the first South African president to be democratically elected after spending 27 years in prison for protesting against government oppression. (Via Wikimedia Commons / Kjetil Ree)

Mandela endured hard labor in the stone quarries of the Robben Island prison. CNN's Christiane Amanpour notes Mandela continued to fight against apartheid even while incarcerated.

"He smuggled out letters and other writings that would fuel the fire of the anti-apartheid movement. ... 'Between the anvil of united mass action and the hammer of armed struggle, we shall crush apartheid.'"

OBAMA: "He no longer belongs to us. He belongs to the ages." (Via NBC)

We'll leave you with a speech the globally respected leader made in 1996, reflecting on his own life and legacy.

MANDELA: "When a man has done what he considers to be his duty to his people and his country, he can rest in peace. I believe I have made that effort." (Via The New York Times)